Originally known as Botanic Lane, as it originally led to Hull’s first Botanic Gardens that had been established at the bottom of the lane since 1812, this street was renamed Linnaeus Street by 1823; named in honour of the Swedish botanist Carl Linnaeus (1707-1778), Linnaeus Street was shown on Baines’ plan of Hull in that year. The Ordnance Survey plan of 1852 shows Linnaeus Street with only eight or nine properties, the rest of the area being gardens or open fields. The Hull Advertiser of April 1828, April 1845 January 1849, carried announcments for: - “Building land for sale near Botanic Gardens”, and in March 1841 “Fruit gardens for sale in Linnaeus Street”. The building registers in Hull City Archives show that the street was still being built upon as late as the 1860s. Later reports in Hull Times of July 1876, mentioned the proposed closure of the Botanic Gardens. The gardens were eventually closed c.1879 and re-opened on a site that is now occupied by the school and grounds of Hymers College off Spring Bank West. The writer to the Hull Times in 1923 also recalled details of Linnaeus Street and the Botanic Gardens: -

“I have a distinct recollection of these Botanic Gardens, or part of them at any rate. After Linnaeus Street (beyond the Avenue) was built up on both sides with dwelling houses, a substantial part of the old garden still existed for years, the entrance gate to this being at the bottom of Convent Lane. The latter in those days was only a short street possessing three terraces. Beyond the last terrace, and the old Botanic Gardens entrance, were some stables and coach houses belonging to a family called Earle’s residing in Linnaeus Street. As children we used to visit these Botanic Gardens and nobody appeared to stop us. The large gate was open all day and we had free access. It was enclosed at one side by the back garden walls of Linnaeus Street residences, and on the other side by the houses and high terrace walls of South Parade (known then as Nunnery Lane), whilst at the furthermost end there was a small outlet into Linnaeus Street.

There were, I remember, some large grass plots which evidently a few years previously had been beautiful, well-trimmed lawns and remnants of what had once been decorative flower beds, but flowers and shrubs and plants had all then disappeared. There were still growing in abundance some large and beautiful trees (elms, beeches etc.) and in one corner there were some white lilacs and a wealth of elderberry trees. For years this garden continued to flourish until one day a party of tree-fellers came on the scene and commenced to operate. Evidently some building contractors bought the site, for shortly afterwards digging, draining, and building operations commenced. The whole of this space is is now built up with terrace property. In close proximity to the old mill stood a large house and garden - then the private residence of Mr G F Grant, the front entrance being in Linnaeus Street. When this house became vacant the, the Jewish community purchased the site and erected thereon the present Western Synagogue” (sic).

Linnaeus Street was a cul-de-sac but linked with Vauxhall Grove on the Hessle Road via a “halfpenny hatch”; the hatch was a gate enabling a short cut enabling a traveller on foot , on payment of a small toll, to travel from one person’s land to another. The halfpenny hatch house was still in place in 1911, when it featured in a newspaper article.19 The house remained occupied into the 1930s but the toll had been dispensed with as the council created a right of way through adjoining property.

Linnaeus Street survives in 2006, but with very little original property other than Linnaeus House and the former Western Jewish Synagogue. Designed by B S Jacobs, it was built in 1902 opening in September of that year, and included a Hebrew School on the same site. The grounds of the synagogue extended through to Convent Lane behind, and the school was erected in front facing Linnaeus Street. An adjoining house, the former Jewish school, lay derelict for many years but has since been converted to accomodation. The synagogue closed in 1994 and now houses a Judaeo-Christian Study Centre and is a Grade II Listed building.

The Hull Guardians Childrens Scattered Home was established at Nos.16, 18 and 92 Linneaus Street in 1915; it had taken in No.23 by 1929. By 1936 it was listed as the Hull Corporation Childrens Scattered Home and was still extant in 1939. In 1915, the York Diocesan Maternity Home was established at No.14; the character of its work was to help unmarried mothers under the age of 25, “of previous good character, and for first cases only”. It was a Church of England home, but girls of any denomination were taken. The following information is taken from “Institutions & Charitable Agencies of the City of Hull”, compiled for The Hull Rotary Club in 1928: -

“The girls are admitted before the confinement, and pay seven shillings and six pence per week during their stay. They remain for six months, and if their babies stay on as boarders after then they pay six shillings a week for the maintenance of the baby. If however an affiliation order is obtained, sums varying from six shillings to ten shillings are paid. The girls, at the end of the six months, if they cannot go back to their old employment, are found suitable work whenever it is possible, and are encouraged to spend their spare time at the Home, so keeping in touch with their babies. 276 girls have passed through the Home since it was opened in 1915. Applications for admission should be made to the Lady Superintendent, Miss Wynn Lloyd who resides at the Home”.

Beyond Linnaeus Street, and facing the Anlaby Road, was a long terrace of property extending to the corner of Regent Street. What appeared to be a continual terrace in later years, had actually been built in sections from the early 19th Century onwards. A single property was shown amidst huge gardens and orchards, on Cragg’s plan of Hull made in 1817; this was almost certainly the property named as Providence Grove on the later 1853 plans; its name suggesting the former gardens were linked with the property in some way. A later plan of 1835 shows the area in more detail, and appears as elaborately laid-out formal gardens. A short lane or path marks the western end of the gardens on the same plan, and this later becomes Regent Street. By 1846 the gardens had gone, and the whole block re-developed as three blocks of houses. Furthest east were three houses in a terrace named as Russell Place in a directory of 1838; then the previously mentioned property known as Providence Grove (re-named Victoria Cottage by 1889), and two separate terraces collectively named Victoria Terrace in a directory of 1846, running to the corner of Regent Street. Although the names suggest they were built uniformly, the detailed Ordnance Survey plans show they were mostly individual houses closely built. Interestingly, these appear to have been amongst the first houses on Anlaby Road built with bay windows. A vacant plot separated the two sections of Victoria Terrace until c.1858, when the plot was filled by the newly built Argyle Hotel public house.

When Anlaby Road was re-numbered to odds and evens, between 1893 and 1899, probably when the town became a city in 1897, this range of buildings was numbered 205 to 231. Sadly, the only surviving property is No.215, now a listed building and part of the NHS Institute of Rehabilitation; the NHS restored the building in 1997 to its present appearance. Built, like many of its neighbours in the Greek revival style, it was probably designed by the architect George Jackson c.1838. At the back of the house are surviving gardens and the rear elevation of the building has been little-altered, giving a feeling of how the other villas along the road would have looked. The Victoria County History described No.215 in 1969:-

“a stucco-fronted detached house of three bays, the central bay being recessed and containing a Greek Doric porch. The frontage is flanked by screen walls which are pierced by round-headed openings and surmounted by acroteria”.

East of No.215, at No.209, stood Driffield House, it too was a Listed building but sadly, permission was given for it to be demolished in December 1975. The site of No.215 is now marked by a two-storey block of flats that appear to be of the same date as two adjacent blocks within Linnaeus Street; Coniston House and Kendal House. 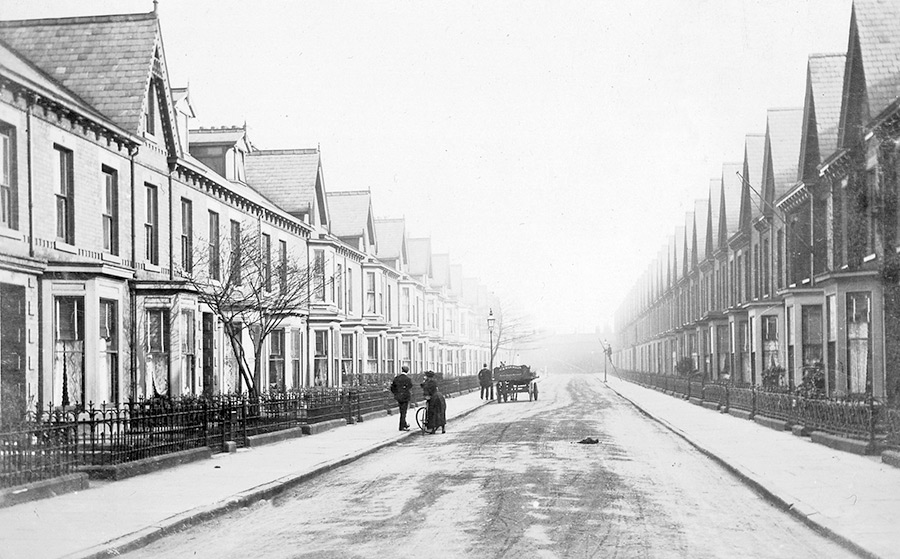 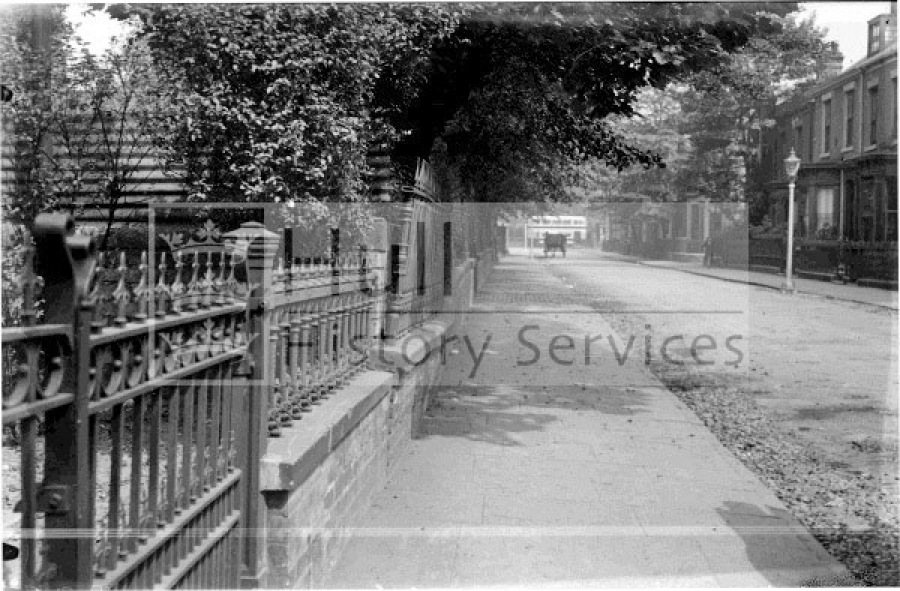 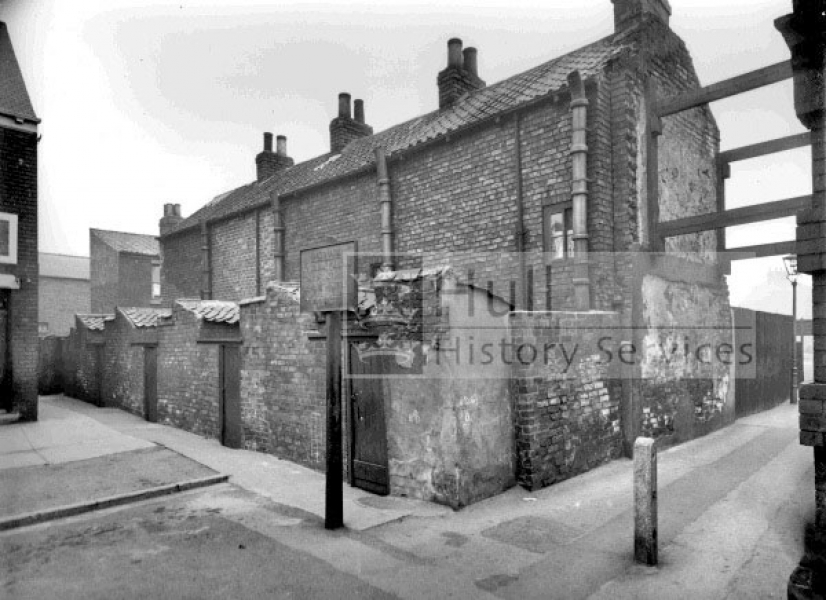 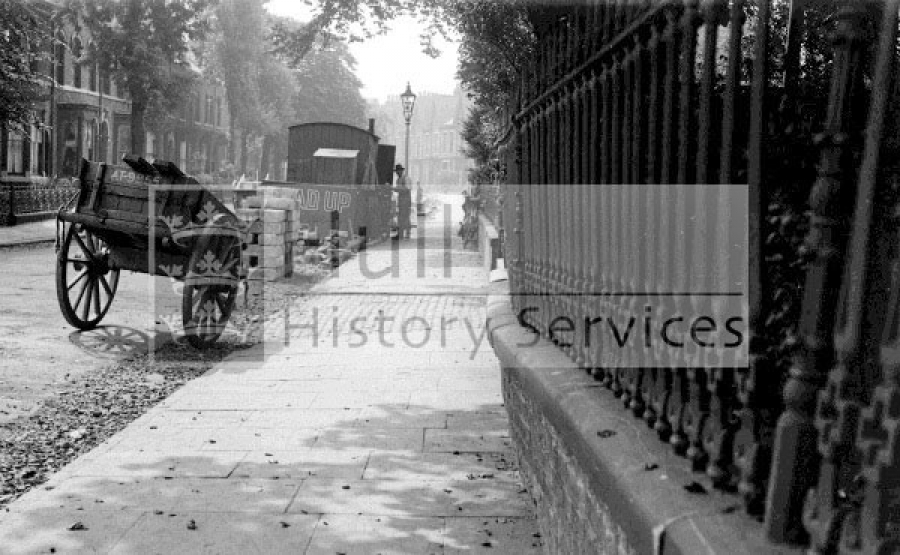 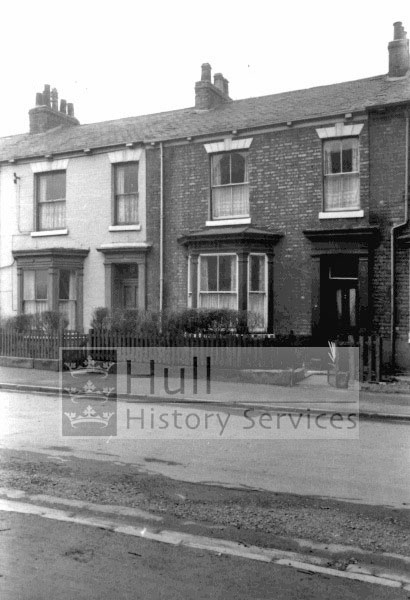 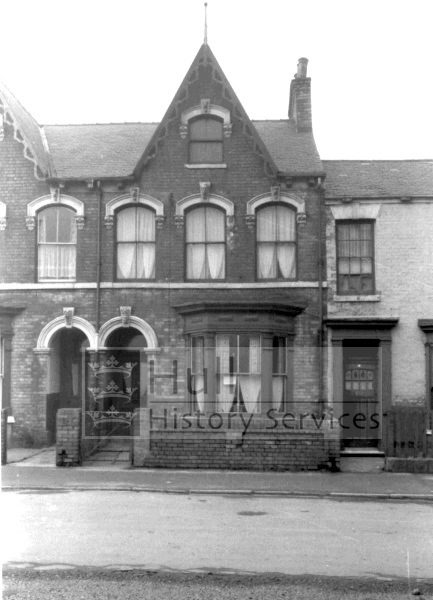 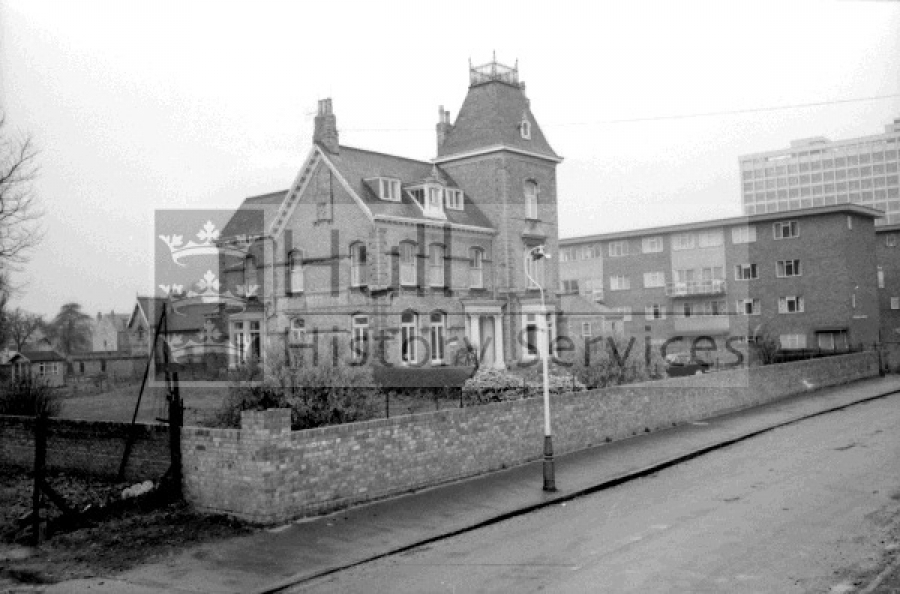 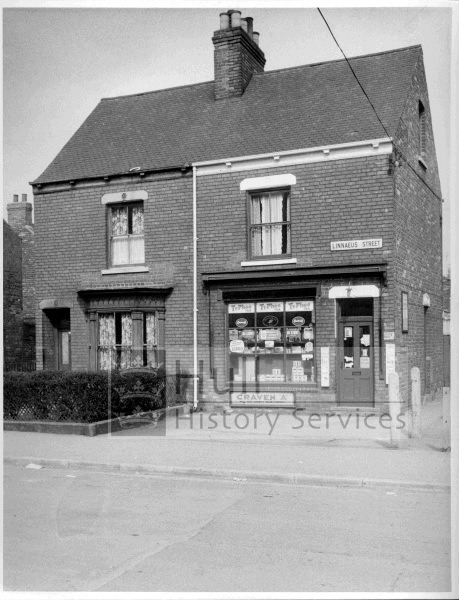 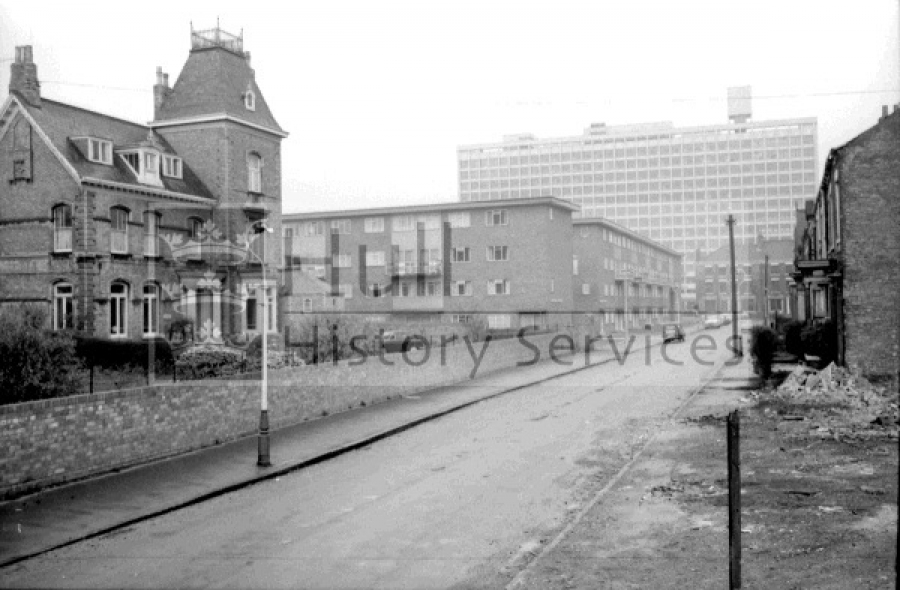 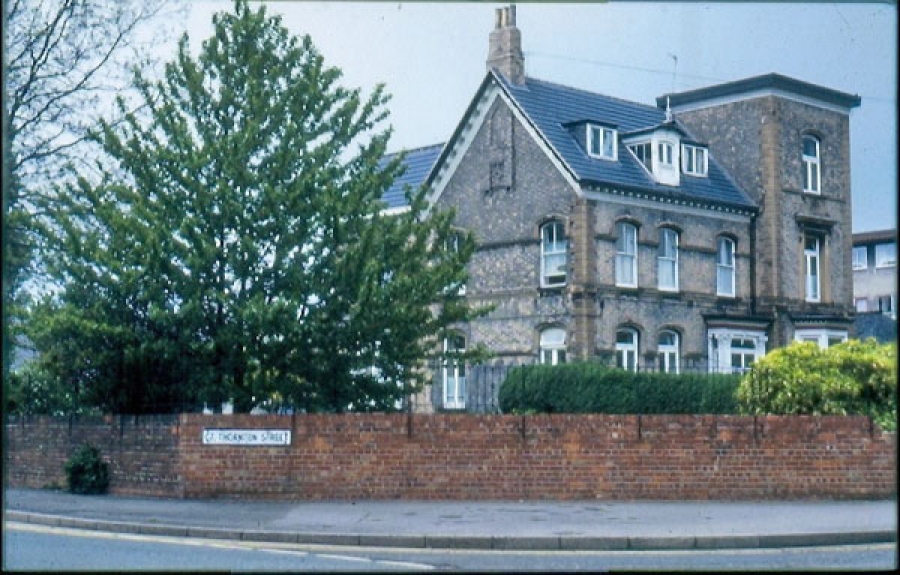 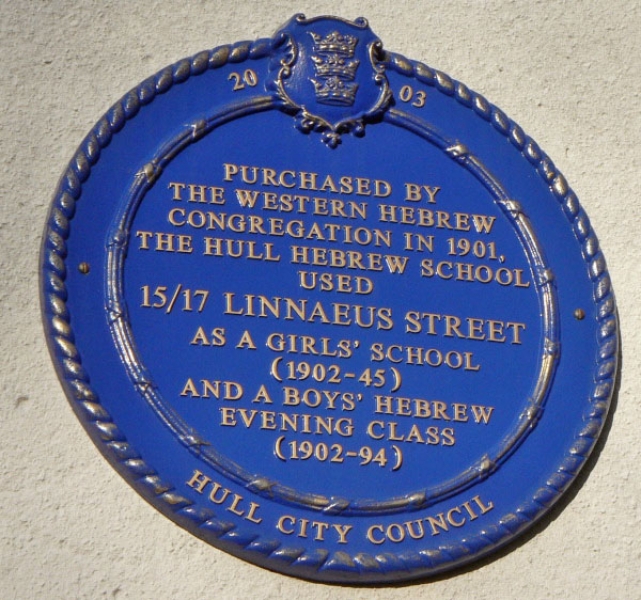 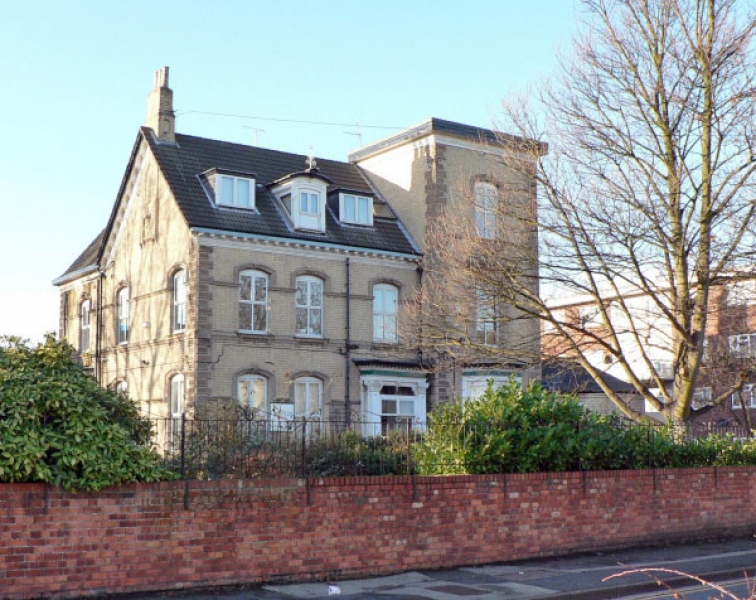