Gladstone Street was laid out c.1870, and by the time of the 1871 Census only six or seven properties were occupied. One of the first occupants was David Parkinson Garbutt, the developer of the “Avenues” (Marlborough, Park, Westbourne etc.), who was listed as a “brick maker”. Kelly’s directory of 1872 listed 15 occupied properties in the street, and 22 by 1875. Its name was no doubt chosen to honour the Prime Minister, William Ewart Gladstone, who served in that post from 1868 until his defeat in the elections of 1874.

The Imperial Steam Laundry was built at the bottom of Gladstone Street in the late 1890s, on an area of land used by many local businesses for their works, which survived into the 1940s. Some of the housing in the street was lost in the air raids of 1941, but the majority remained occupied until the 1970s, with some still inhabited until their demolition from 1980 onwards; no original buildings survive.

Beyond Gladstone Street, was another elegant terrace, known as Albermarle Terrace. The terrace consisted of seven houses in the Italianate style, similar in design to Crown Terrace, and almost certainly designed by architect Frederick William Hagen. Architectural student Ian Goldthorpe, writing in the 1950s, described them, somewhat generously as “probably his finest group of terraced houses”. The terrace was not built as one, sections having been constructed at several different dates. By 1875 only three houses had been built, including the larger corner property at the east end known as Temple House, later used as a private girls school. The main entrance to the school was in Gladstone Street. The grand terrace, latterly Nos.216 to 228 Anlaby Road, was home to many of Hull’s leading men, includin Richard Thornton-Varley, James Saltmer (Lofthouse & Saltmer), Hebblethwaite the land agent etc.

Beyond the terrace was an open plot, with a footpath leading to Mr Richards’ florist & gardener’s premises. The plot in front of the gardens remained empty until c.1920, when W L Thompson, Motor Car Agents, built a showroom and garage on the site. Beyond the large plot, latterly the site of Thompson’s garage, was the final house on this block, known as Arnold House. Built c.1870 for wine & spirit merchant William McBride, Arnold House was named as such, as it stood at the corner of Arnold Street. In early directories and the Census returns, it is often referred to simply as No.1 Arnold Street. The houses in this terrace had mostly been demolished by the 1980s, but Temple House, the former girls school, survived until 1991. 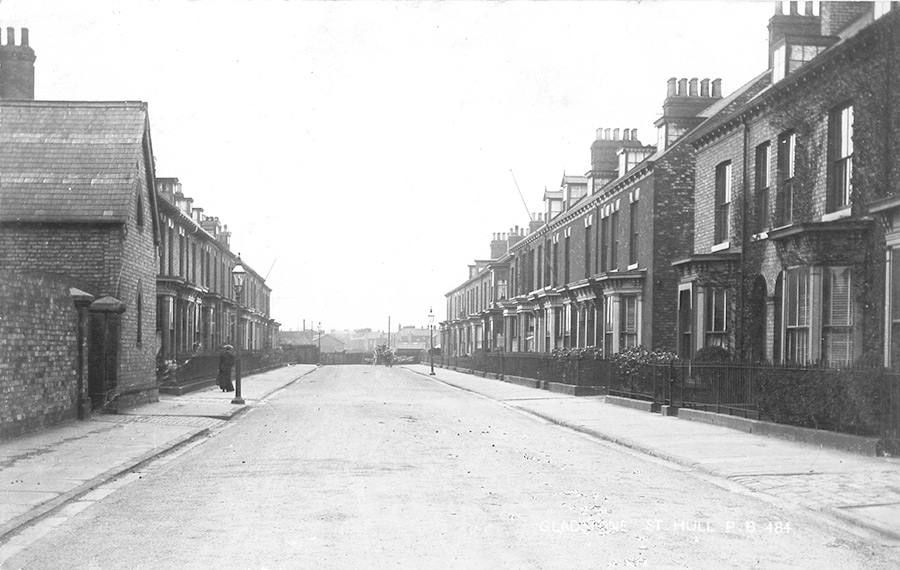