Convent Lane, originally Mill Lane, and later Oil Mill Lane, was named as such because it led to Mill Yard and a large windmill situated on its west side. The mill, which had been in existence since at least 1807 (see West Parade), was originally a corn and flour mill, and is shown on Anderson‘s 1818 plan of Hull as a Ridsdale’s flour mill; Mr Ridsdale was first listed as a miller, on Anlaby Road, in an 1806 trade directory. The mill was built of brick and its machinery powered by five sails; an advertisement in the Hull Advertiser of 29 March 1822 gave a description of the property: -

“To be SOLD by PRIVATE CONTRACT,

THE CORN WIND MILL and PREMISES on the Anlaby Road, opposite to West Parade, now occupied by JAMES ELLIS.

The Ground Plot consists of about One and Half Acre, and the Buildings are the Mill in very excellent condition, convenient Granary Room, Stable and Sheds, with a Dwelling House and Two Tenements, all in good repair, large Garden, well stocked with Fruit Trees, and in a thriving state; the Garden Ground is frontage to Anlaby-Road, and very desirably situate for Building Ground.

The Mill contains 3 pair French Stones, Iron Axis, and is replete with requisite Machinery, on the most approved principle; the great improvements in the neighbourhood are particularly calculated to give the Mill local advantages, and as the present Occupier is intending to remove to another situation in a distant part of the country, an opportunity will be afforded of introducing the Purchaser to the current business. For further Particulars apply to JAMES ELLIS, on the Premises” (sic).

The mill was twice more advertised for sale, in the Hull Advertiser of 1822 and 1830, but continued to be known as Ridsdale’s Mill until at least 1850. The 1853 Ordnance Survey plan then shows it as an Oil Mill known as the Carr Mill, indicating it had been converted for seedcrushing by that date; “Carr” was most likely a reference to its location, although it could have been the name of one of its many owners.

John Storry, of Oil Mill Lane, who purchased the mill during the 1850s, built two houses in the lane in 1861, a further three houses in 1862 and another in 1863. He was an oil miller and it appears that he had converted the mill for seedcrushing, to produce oil. During the 1870s Mill Lane became known as Convent Lane, although it is still mentioned as Mill Lane in later directories; the construction of the convent mentioned earlier was obviously the cause of the re-naming. Buildings relating to the old mill, were still shown on the 1890 Ordnance Survey plan, although the mill appears to have been demolished by that date. Memories of life in Convent Lane during the 1880s were submitted in a letter to the Hull Times, 17 March 1923. Elderly Hull resident, Mr A Clifford, recalled: -

“At the present time and situate on the right side of Convent Lane, a short distance down, there is a large garden belonging the Catholic Convent, which is utilised as a praying ground. It is enclosed by a large wall and approached by a small postern door. This garden occupies what was formerly the site of an old mill. It was called “Old Black Mill”. I have no recollection of it working, but have been informed that at one time it was used in the oil refining and seed crushing industry. I do remember this dilapidated old mill standing for years, its rickety tower being supported by massive timbers to prevent its collapsing. Down the adjoining yard, commonly known as Mill Yard, was a long row of cottages, in which formerly resided the mill hands.

At the corner of the lane there still stands a small shop with house attached. This, I understand, was at one time the residence of the mill-keeper. I can also distinctly recall on the opposite side of Convent Lane (prior to the extension of the Convent premises), there stood in its own grounds a beautiful mansion. I have no recollection, however, of anyone residing there, but have been informed that the house was formerly owned and occupied by a family called Newton, and the property eventually went into Chancery.

This old building, to my knowledge, stood in a forlorn and dilapidated condition for years. It was roofless and windowless, and everything of any value had long since been removed. Apparently in former years it had possessed French windows overlooking a spacious lawn and artistically laid out flower beds, but all the surrounding space, as I remember it, was literally covered with bricks and debris up to the time that the Catholics bought the property. Upon the site of this old house there now stands a Catholic Convent and St Mary’s High School for Girls. Probably many older readers of the Hull Times can recall the time when the Newton family where in actual occupation of this house and when they possessed a large croquet ground, which was situated on the right side of the lane and facing their private residence.” (sic)

Between Convent Lane and Linnaeus Street, to the west, there were initially only three buildings. These were much earlier than their surrounding neighbours and had been established since the early 19th Century. At the corner of Convent Lane was Carr Cottage - its name linking it to the former Carr Mill, that was occupied throughout the mill’s working life by the foreman at the mill. The cottage was built c.1820, with the front of the house, facing west, away from the hustle and bustle of traffic in and out of the mill and yards. The old building survived until the early 1950s, when it was still used as a shop, and the redevelopment of the area began; the line of Convent Lane is still marked by a street sign at its southern end although there is no vehicular access from Anlaby Road.

The site of Carr Mill, the cottages and yard, is now occupied by Anchor House; once a social centre for seamen visiting Hull from all over the world, it was the base for the Roman Catholic Port Chaplain and was run by the Roman Catholic Apostleship of the Sea. The facility had previously been located in modest premises in Charles Street, but with funds raised by the Apostleship and its supporters a new centre was designed and built in the 1950s. The new centre had lounges, a games room, a bar and a restaurant. The centre closed for a short time and re-opened on 21 May 1957 following the conversion of what was once the gymnasium of St Mary’s school; this had been extended to create a new social hall for functions and dances etc., at a cost of £27,000. Anchor House eventually closed due to a reduced need for the facilities it provided, and is now serving as a residential home, with 38 rooms.

Beyond the garden of Carr Cottage was the Hull, East Riding & North Lincolnshire Female Penitentiary. The term penitentiary conjures up images of prisons and women locked in cells, however this was not the case. The institution was a refuge, established in 1811 for “the reclamation of fallen women”, and was supported by voluntary subscription. Managed by a team of ladies, the house afforded an asylum for 30 penitents, who were required to stay for one year, following which they were placed in “respectable situa-tions”. The service was discontinued c.1825, before re-opening again in 1837. The penitentiary was rebuilt to the designs of architect Charles Hutchinson in 1839 on the gardens in front of the older building. Following the re-building the penitentiary became known as Hope House. The Victoria County History notes that the “new” building, latterly No.199 Anlaby Road, was designed in the Greek revival style by architect Charles Hutchinson, and completed in 1840. In 1881 the Census listed 28 “inmates”, their ages varying between 15 and 37 years. The Hull Rotary Club gave a more detailed study of the institution in a 1928 review of the “Institutions & Charitable Agencies of the City of Hull”: -

“Hope House, 199 Anlaby Road, character of work - a rescue home for fallen girls, who are taken in for two years and given a thorough training. Chairman Thomas Priestman Esq., Treasurer and Hon Sec. E.M.Thompson Esq. 79 Albany Street. Many look askance at the dull building on Anlaby Road known as Hope House, but to the girls it is a real home and a happy one. The two years’ training in laundry work fits them for earning their living, and on leaving, suitable situations are found for them, and a complete outfit provided. This is a considerable item, for clothing is very costly, as a great many girls pass out of the Home, the bill for drapery is exceptionally large. Nearly all the clothing is made in the Home, only outdoor coats being bought ready made. This entails many hours work each week on the part of the matrons. The girls are taught plain sewing, knitting ad mending, while fancy work is a source of interest to many. The evenings are spent in recreation, singing and reading. The food is necessarily plain, but plentiful, and not too monotonous. Gifts of fruit and cake are greatly appreciated by young healthy appetites. Very encouraging reports from mistresses are constantly received, and are much more numerous than complaints, through these are by no means unknown. For some of these poor girls seem utterly incapable of standing alone, and our object is to strengthen them and teach them where to obtain help in their often-difficult lives. The Head Matron keeps in touch with the girls after they leave, and is more than repaid by their love and gratitude for help given in their time of need”. (sic)

Hope House closed in 1937 and the proceeds from the sale were divided between the Hull Royal Infirmary and the Hull & Sculcoates Dispensary. The building survived and was used as a storage facility before being demolished in the 1970s; a fragment of wall and a tall stuccoed pilaster adjoining No.197 next door is all that remains of Hope House. No.197 is a later property known as Albert Cottage, and was built between 1842 and 1848, immediately east of Hope House. This was latterly a post office and a rare survivor in this area, it is now a florists.

Filling the gap between Hope House and the corner of Linnaeus Street, were two properties, firstly a modest property built c.1848 and known as Leanion Cottage. Beyond Leanion Cottage, was a larger detached mansion house, known as Elm Lodge or Elm Cottage, which must have been built c.1817 or perhaps earlier, as it appears on a plan of that date. 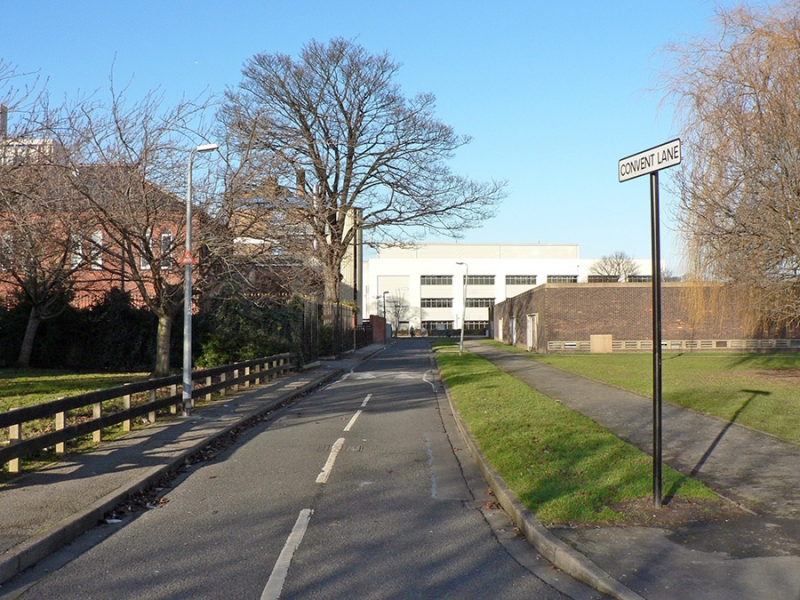 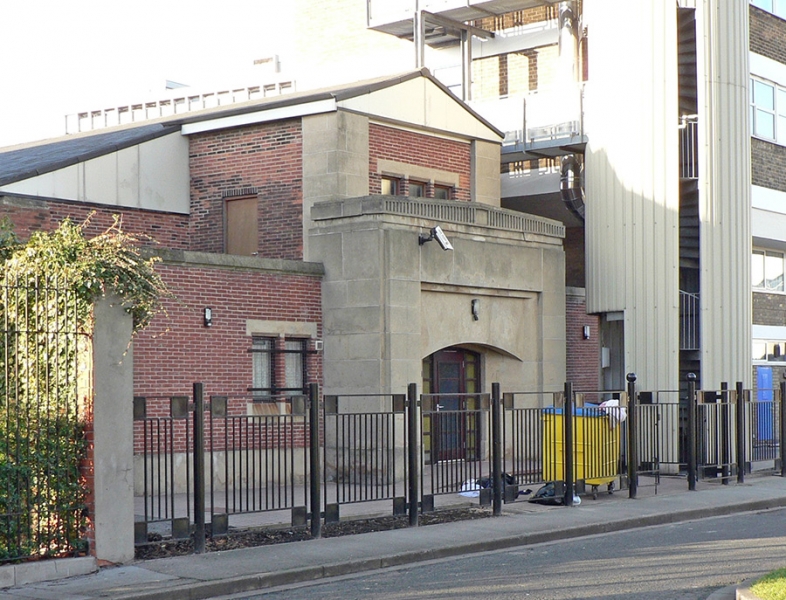 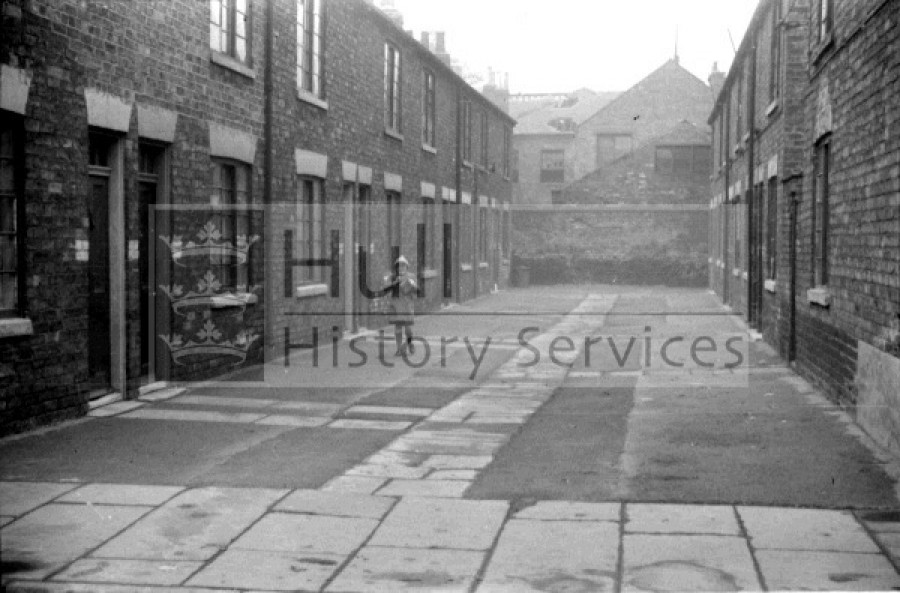