Campbell Street ran north from the Hessle Road to the Anlaby Road, through land owned by the Broadley family. Miss Sophia Broadley signed a contract to have the street laid-out in 1861, and it was developed from that date. Its name could have been taken from any number of Campbells, who were linked with the life of Miss Broadley; alternatively it may have been named after Sarah Campbell, the tireless matron of the Borough Asylum on Anlaby Road during the 1850s. The Broadleys found themselves in the company of many other so-called “slum landlords” during the 1870s, when Day Street and Campbell Street were described in the press as “simply disgraceful”, and “the haunts of disease and death”. The terraces of grand houses that faced Anlaby Road often hid masses of low-quality housing, in the warren of streets and courts that were developed behind. These inferior housing developments were often slotted-in around pre-existing industrial buildings on any available piece of land whatever its shape and size.

Campbell Street was developed from an older lane, which had led to a tannery, established on the site many years earlier. The 1861 Census refers to it as Tan Yard Lane with tanner Thomas Holmes, residing at Shalam House, No.1 Tan Yard Lane. The Holmes family established their tanning business in Hull c.1803, at premises in Church Street, Wincolmlee; a John Holmes, late of Doncaster, was first mentioned as a tanner in the directory of that year. Between 1823 and 1826, one of John’s sons, Thomas Holmes, also listed as a tanner, had acquired property on West Parade, Anlaby Road. This may have been a residential address, and John Holmes junior was listed at West Parade in 1828, whilst John Holmes senior was still listed at the original premises in Church Street. By 1834 John Holmes & Son were listed as tanners on the Anlaby Road and an 1835 plan of Hull shows their property in-situ, on the Tan Yard Lane site. Later maps show the complex of buildings gradually increasing in size, until they dominate the area around the small lane. The largest warehouse on the site was constructed for Thomas Holmes in 1860, to the designs of architect William Botterill. The Holmes’ tannery had become the largest in the town and in 1851 employed 100 men, along with 36 men and four boys employed at the original Church Street tannery. Historian James Sheahan, writing in 1866, said of the company: -

“One of the most perfect establishments of its kind is the Anlaby Road Tannery, which has, like many other places of business in Hull, been rebuilt and very much extended. Its owners (Messrs Thomas Holmes & Son) are the tanners and manufacturers of the famous patent walrus and hide leather strapping, now used in the principal works in the kingdom, in which very powerful straps are necessary. There are two or three smaller tanneries.”

The Holmes family, Thomas, William, John and Samuel (later a JP), continued in the tanning business for many years, and the family home Shalam House was occupied throughout the life of the company. Shalam House is shown derelict in a 1940 photograph, and narrowly survived bombing in World War Two. It was badly damaged however and was demolished soon after the war.

During its heyday, the company dressed leather at Anlaby Road, whilst leather for shoe-soles was made at Wincolmlee, from salted Buffalo hides. The family firm became a limited company in 1890, with T B Holmes as chairman; the fully paid capital amounted to £110,000. By 1936 the company had reduced their operations, having sold off some of their sites, and concentrated all their work at Wincolmlee. The old Campbell Street works were used by a number of other businesses, including a transport company, until being demolished in the 1960s redevelopment of the area.

St Thomas’s Anglican Church and St Thomas’s School rooms behind, formed unlikely neighbours with the foul smelling tannery buildings in Campbell Street. Initially a temporary church, St Thomas’s was opened in 1873, and a more permanent church was consecrated in 1882. The church was cruciform, in red brick, and was designed by Edward Simpson of Bradford. Wrigglesworth noted: -

“An iron church was previously used for some years, and is now occupied as a parish room. The church consists of a nave and aisles, double transepts in the north and south aisles, an apsidal-ended chancel, with vestry and organ chamber on the south side, and a porch and lofty octagonal bell turret on the north, at the junction of the chancel and north transept. A noticeable feature of the church is that the aisles are com-paratively narrow, and the walls unpierced by any win-dows, the lighting depending entirely upon a lofty range of clerestory windows. There is, however, no lack of light in any part of the church. There is an excellent organ, the gift of Col. Saner, JP. The church has accommodation for 750 persons, all the seats being free. The cost of the church was about £94,000, exclusive of the site” (sic).

Sadly, and somewhat unluckily, St Thomas’s was damaged by Zeppelin bombers in World War One, and suffered again during World War Two. The church was demolished soon after 1945 and the site is now lost under council housing, but the name was perpetuated in a district church in the parish of the Ascension.

Only the gardens of a large mansion-house stood between Campbell Street and the next street off Anlaby Road - South Parade, until c.1875. Set back from the street, the large property was known as Elm Tree House, and was built c.1830. The residence was still shown on the 1853 Ordnance Survey plan of Hull, but between 1875 and 1879 the block was redeveloped with new property fronting the Anlaby Road with a network of smaller terraces behind. The property facing Anlaby Road consisted of two, two-storey buildings named Livingstone Terrace (at the east end) and five, three-story buildings named Livingston Arcade (adjoining at the west end). These were purpose built as shops with living accommodation above; the whole terrace was damaged during World War Two and demolished c.1950. 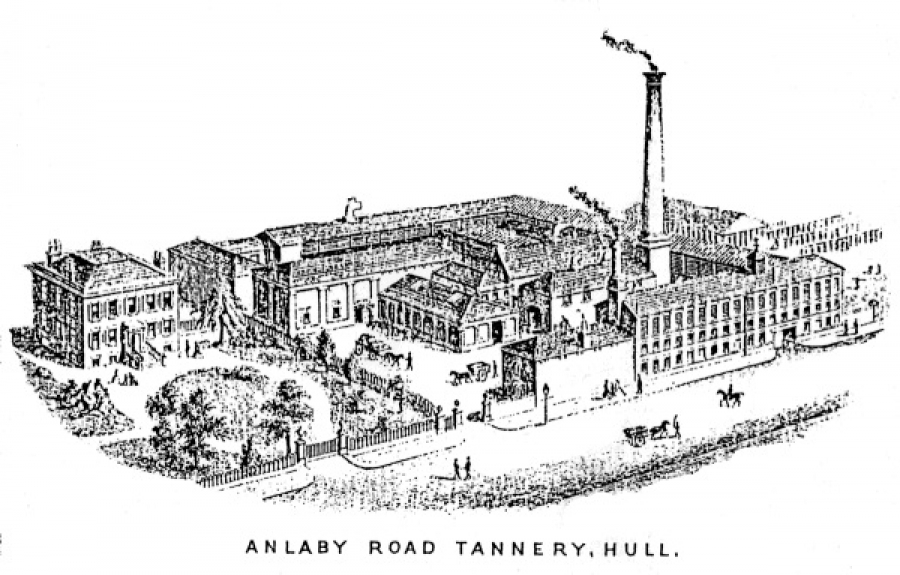 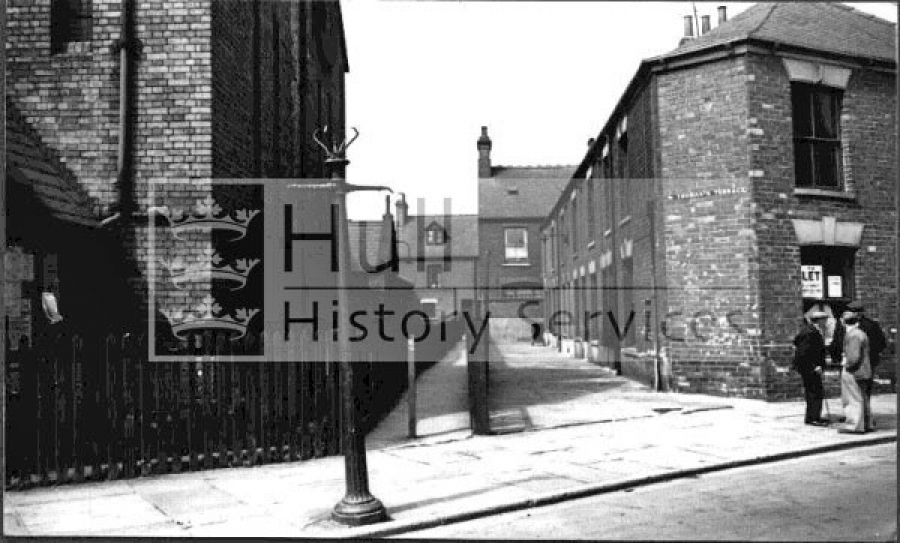 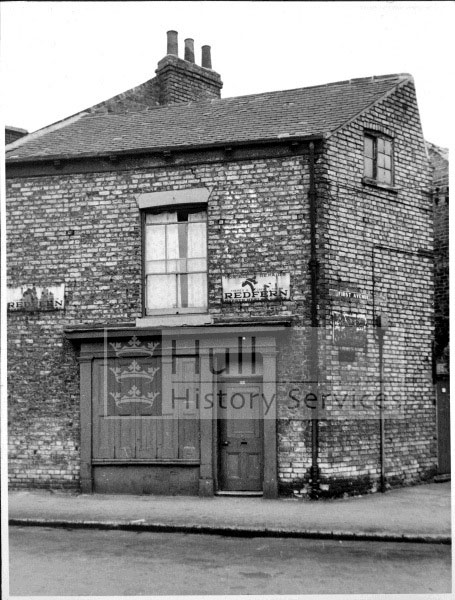 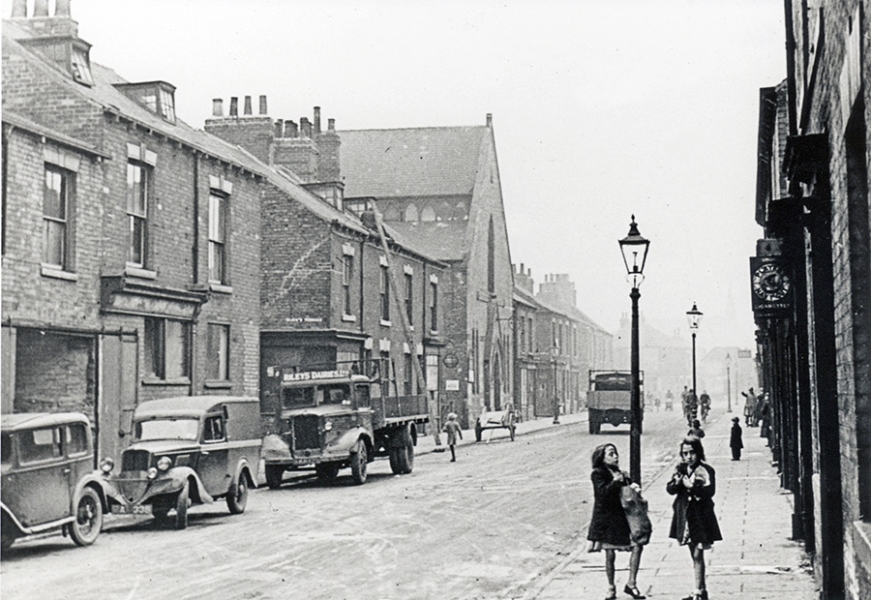