As the sport of cricket was organised in Hull from c.1822, the following years saw four local teams become established, and the seven-acre Brown Cow Field was home to at least one them. The Hull Kingston Cricket Club was established here by 1846 and a landlord of the Brown Cow Inn, Andrew Crossland, became the club’s first professional player. Meetings of the club were frequently held at the inn, but the cricket team was forced to relocate as the fields around the old inn were acquired for development during the 1860s. The club’s new home was a pitch off Argyle Street, where they moved c.1864.

The continued and varied use of the area for sports and entertainments was no doubt the reason for the establishment of the many theatres here in the ensuing decades, e.g. Hengler’s Circus and The Palace. Hull Fair had also moved to Corporation Field by 1865 as the area continued to be built upon.

Immediately next door to The Circus, was a pub known “Victoria Vaults”, a beer-house connected to the business of bottler and wine & spirit merchant James Southam. The Vaults was built near the site of the former Brown Cow in the early 1860s, and redeveloped in 1898 to the designs of the architect J M Dossor. The Hull Brewery Company acquired the bottling business (but not the licence or the pub) in 1948, and maintained the pub until closure and subsequent demolition c.1967.

All of the property known as Frederika Terrace), between Pease Street and Great Thornton Street, was demolished following its compulsory purchase in 1966. From this year onwards this historic part of the Anlaby Road was obliterated in one of Hull’s most regrettable clearance schemes. The area between Pease Street and Great Thornton Street is now dominated by two 15-storey tower-blocks known as Cambridge Street Flats - Block One and Block Two. Plans were approved for the flats under “Building Scheme 39R”, and building commenced in 1973.

The shared junction of Great Thornton Street and Walker Street can still be seen but has now been re-named Icehouse Road. Beyond the junction the Anlaby Road widened, probably illustrating the need for more traffic space as the road developed. The historian Edmund Wrigglesworth, writing in 1890, note : -

“The Anlaby Road here broadens out, and from the elegant houses and mansions which line its sides, and the quality of its foliage, presents a striking picture of modern street landscape”.

The first line of “elegant houses and mansions” running west from the junction of Great Thornton Street and Walker Street, was named Coburg Terrace. Sometimes shown as Coburg Place, it was constructed earlier than the buildings to the east, nearer the town, and was laid out c.1820. Coburg Terrace ran from Great Thornton Street to what later became De Grey Terrace. The development consisted of eight houses, with front and rear gardens, but the front gardens were lost as the Anlaby Road was widened here, between 1860 and the 1880s. It is possible that the whole terrace was rebuilt to a more uniform appearance at that time. Coburg Terrace suffered a direct hit in 1941, during World War Two, and was demolished by 1946.

At the west end of Coburg Terrace was a small development of seven properties facing the Anlaby Road known as Albany Terrace or Place, which extended to the junction of Day Street. The terrace was split halfway by one of the Anlaby Road’s lost streets known as De Grey Terrace.

Fronting the Anlaby Road between Day Street and Campbell Street was a terrace of property known as Cottage Row, built c.1820. Erected much earlier than neighbouring property, Cottage Row’s name probably referred to one of the long established and larger, detached houses in the vicinity, possibly Shalam House to its rear, or the much larger Myton House to its west. The term “cottage” was then commonly used to describe much grander properties than the word suggests today, and could simply describe a line of elegant cottage properties. Cottage Row was also very badly damaged by severe bombing in World War Two, and was demolished by 1946.

Several houses were lost from the west end of Cottage Row, when a new chapel, the first to be built on the Anlaby Road, was constructed on the site. Tenders for the construction work were requested in 1865, although it was not until the winter of 1868 that the chapel opened. It had seating for 1,100 and was designed by the architect W H Kitching in the Gothic style. Costing £9,000 to build, it was named in honour of John Wycliffe, the 14th Century theologist, who provided the first English translation of the bible. A leaflet, issued by the committee of the church fund in November 1868, reported the following progress to the list of eminent locals who had promised donations: -

“The committee have much satisfaction in being able to announce to the subscribers that Wycliffe Chapel is, without the exception of a portion of the tower, now finished. Until the board of Health shall have completed their operations in Campbell Street, nothing more can be added to that side of the building. The length of time spent over the works has been a source of much disappointment and anxiety, but their substantial character will now go far to compensate for all delays. A most important part of the undertaking still remains to be accomplished, and in drawing attention to the annexed list of subscribers the Committee earnestly desire to secure the continued exertions of the Subscribers and their friends. A large amount remains still to be collected, and as the desirability of relieving the building from debt is apparent to all, it is hoped that the efforts of all interested in the new Chapel will be turned to the accomplishment of so desirable an object.”

The chapel closed in 1935, and was used as showrooms until it was demolished in January 1939.

Until c.1875 only the gardens of a large mansion-house stood between Campbell Street and South Parade, the next street on the Anlaby Road. Set back from the street, the large property was known as Elm Tree House, and was built c.1830. The residence was still shown on the 1853 Ordnance Survey plan, but between 1875 and 1879 the block was redeveloped with new property fronting the Anlaby Road with a network of smaller terraces behind. The property facing Anlaby Road consisted of two, two-storey buildings named Livingstone Terrace (at the east end) and five, three-storey buildings named Livingston Arcade (adjoining at the west end). These were purpose built as shops with living accommodation above; the whole terrace was damaged during World War Two and demolished c.1950. 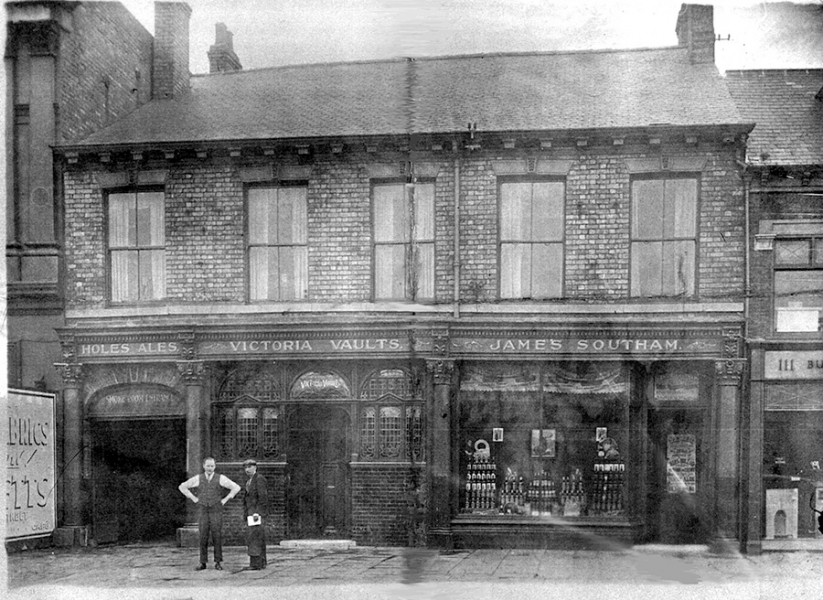 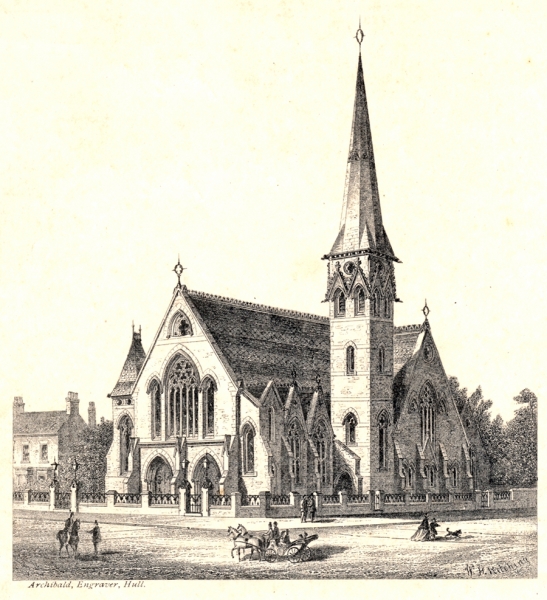