Writing in 1890 the eminent Victorian local historian, and Anlaby Road resident, John Travis-Cook notes that in documents dating from 1482, a sewer is mentioned adjoining ”Maydnhyll” and that: -

“the name ‘Maidenhill’ survived to very recent times as the designation of four closes of meadow-land containing about 40 acres, late belonging to the Broadley family, and lying at the extreme west end of Myton.

... of curiously irregular outline on their eastern side, the closes ran from the south side of Anlaby Road across the Hessle Road to the ‘Groves’ or ‘Growths’ on the Humber bank” ... “until the recent extension of the borough their western edge formed part of the western boundary of the town of Kingston upon Hull, their own western boundary being the Galley Clough drain”.

Maiden Hill was obviously an area of great historical importance, and had formed part of an ancient boundary that was almost certainly the drain or sewer mentioned in 1482. The “Gally” or “Galley Clough” drain ran south from the Spring Dyke (the line of Spring Bank West) to an outlet on the Humber Bank, and was still shown on 1853 and 1889 Ordnance Survey plans of the area. It is amazing to think that the present line of Walton Street, Walliker Street and Division Road mark the route of such an ancient course. As the main Anlaby and Hessle Roads met the natural boundary formed by the Galley Clough Drain, these sites were chosen for toll-bars when the turnpike roads were constructed. Maiden Hill House, the original farm building, was available to let, according to the Hull Advertiser of 21st April 1804: -

For a Term of Seven Years, and entered on at pleasure,

MAIDEN HILL HOUSE, situate one mile and a half from Hull, adjoining the Turnpike Road leading to Anlaby, in a very pleasant situation, fronting the south, commanding a very pleasant prospect of the Humber and Lincolnshire Coast. The House consists of six good rooms on the ground floor, good stair case and chambers, extensive Cow-Houses, Stables, and a small Barn; convenient Carriage Sheds, Piggery, Standing Garth, and Stack Garth; an overflowing spring of excellent Water, both for drinking and washing; together with the Garden, containing upwards of 2¼ Acres of rich Land, in a high state of cultivation, full of Manure, and well planted with choice Fruit Trees, Asparagus and Strawberry Beds; the walls, which are lofty, are planted with choice Peach, Nectarine, Apricot, and Plumb Trees, all in a very flourishing state. The Tenant, if required, may be accommodated with some Meadow or Pasture Land.

For particulars apply to T W Winter, the occupier,

WHO HAS ON SALE,

Maiden Hill Farm was the long-time home of well-known farmer Samuel Beecroft, and was still in existence up until the creation of West Park Row in the late 1890s, which required its demolition.

The area known as Newington begins here, and the line of Walton Street, running south into Walliker Street, marks the original extent of Hull’s town boundary (as settled in 1832-37). The boundary of Hull was extended to the line of Calvert Lane in 1882, at which point it took in the district of the Newington Local Board acquired from the parishes of Kirkella and North Ferriby to whom it belonged. The boundary was extended further west in 1929 and 1935.

Beyond Walliker Street is Newington Villas, continuing the long line of terraced property running along the Anlaby Road frontage. The rather grand name applied to a single line of property built c.1874, leading to the corner of Granville Street. These were purpose built as two storey shops, with accommodation above (including attic rooms), as part of the Granville Street development. The terrace was extended east to the corner of Walliker Street, as the new street was laid out c.1881, and suffered damage in World War Two which caused the demolition of several shops; the rebuilt property, a former Jackson’s store, is now occupied by Sainsbury’s.

Beyond Granville Street are Granville Villas and the adjoining Granville Terrace, both constructed between 1875 and 1879, and now appearing as one terrace; mostly purpose built as shops, the two-storey buildings are more modest than those surrounding. One house was built independently of the two terraces, known as The Hollies, which survives as No.459, and is noticeable as it projects slightly further into the street than the neighbouring property. The first shops in the terrace, Nos.455 to 457, were taken over by Woolworths in 1957, but since then many in this terrace have deteriorated and lay derelict and in need of maintenance. A sign of their original quality can be seen from some surviving details above eye-level, and in the high quality craftsmanship of the shop frontage further west. Situated immediately west of Granville Villas/Terrace, on the corner of Sandringham Street, the site was originally occupied by two semi-detached, double fronted houses; Beech Wood House and Clifton House (latterly Nos.483 and 485). Constructed around 1874 as part of the St George’s Road and Sandringham Street development, these elegant houses were similar in design to those surviving, further west beyond St George’s Road. Sadly, the pair were redeveloped when a new branch of William Jackson’s opened in 1913 at the corner of Sandringham Street. The distinctive frontage remains at first floor level.

The next block of property, leading to St George’s Road, was only partially complete by the time of the 1889 Ordnance Survey plan, with three houses on the corner of St George’s Road. Built around 1872-74, and listed individually in a trade directory of 1874, these were known as Lyndhurst, Lynton Villa and Ashburnham (Nos.495, 497 and 499). The land adjacent to them, at the corner of Sandringham, Street was shown empty on the 1889 plans, and was developed later, between 1900 and 1904, with four purpose-built shops. Lynton and Lyndhurst (495 and 497) survive, and were almost identical to Beechwood House and Clifton House, having had large formal gardens to the rear, which survive only in part. The pair share the same owner who is taking steps to ensure the original frontage of No.497 is retained, although No.495 has already been converted into two shop units. The house at the corner of St George’s Road, Ashburnham House (latterly No.499), was occupied by postmaster Samuel Walliker (see Walliker Street) and later by a bank manager, an ironic twist, as the site was redeveloped as a branch of the Hull Savings Bank. The stylish building was constructed in 1925, to the designs of the architect John Bilson, in the classical style and more recently was used as a restaurant before being converted into a public house known as The Three Crowns, opening in March 2003. The name “Three Crowns” refers to the former shield of the Hull Savings Bank, located above the main entrance of the building. The shield represents the Hull coat of arms, which in fact consists of three coronets. 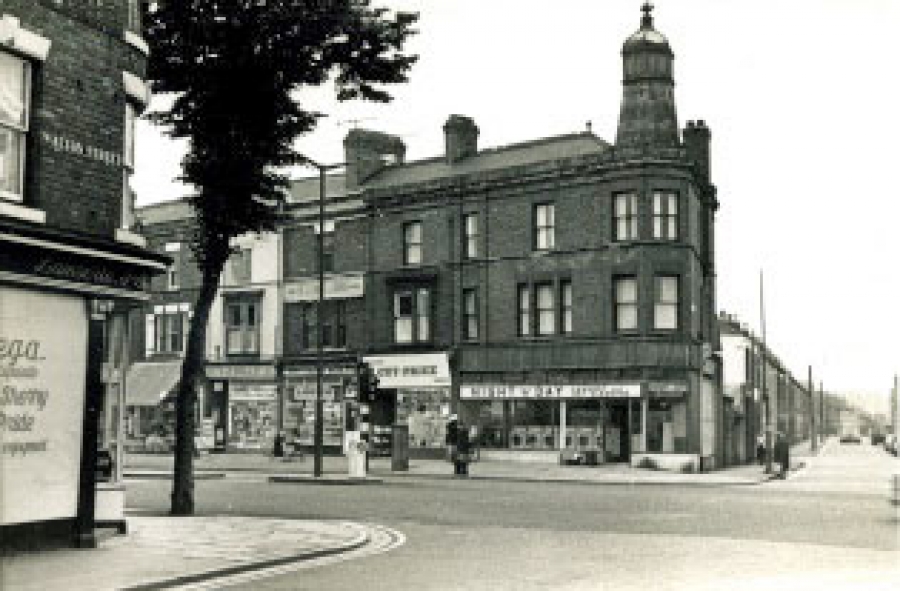 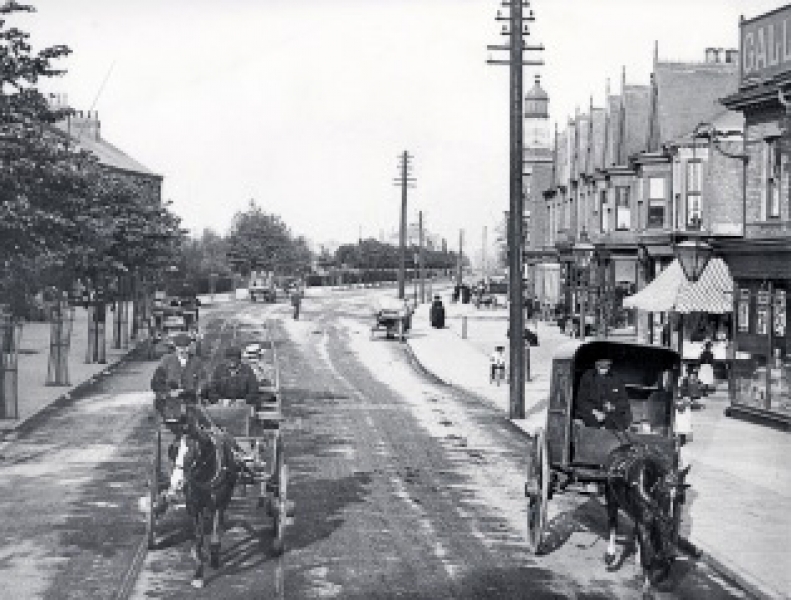 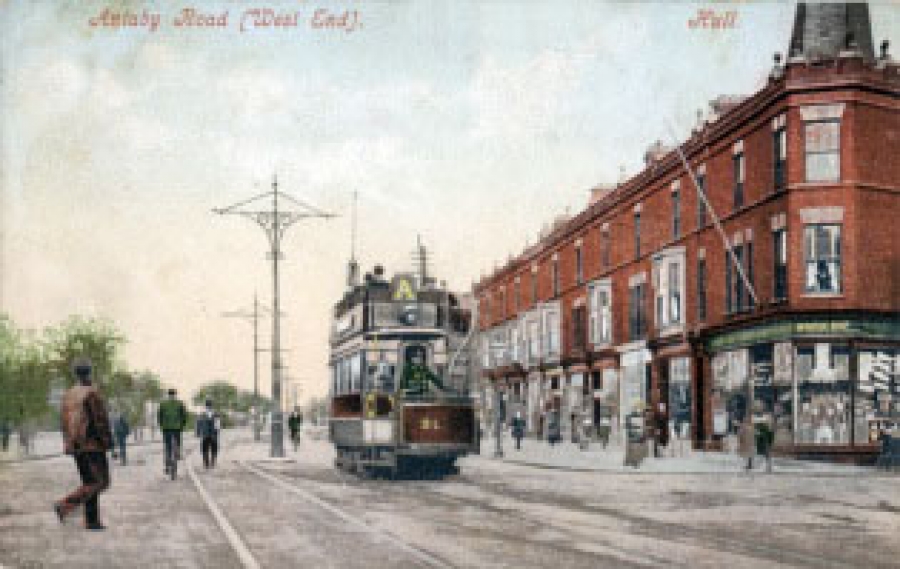 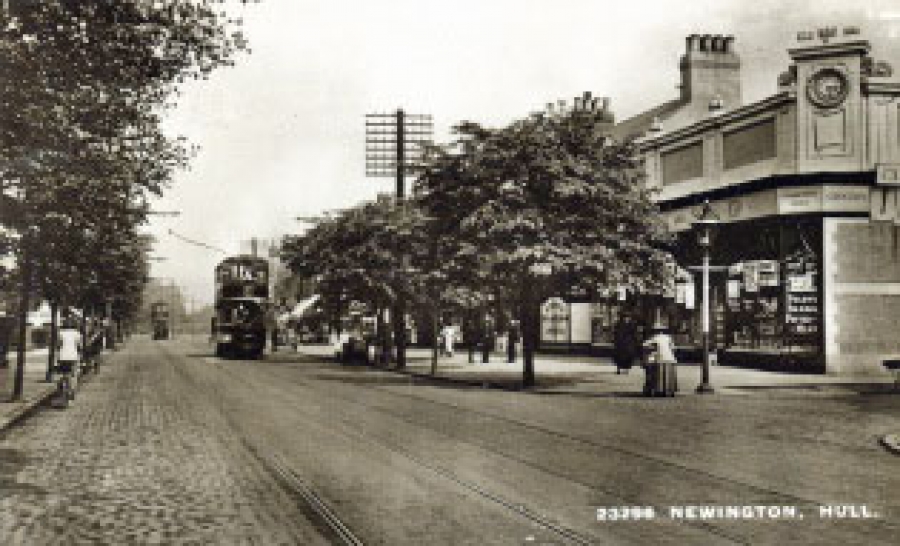 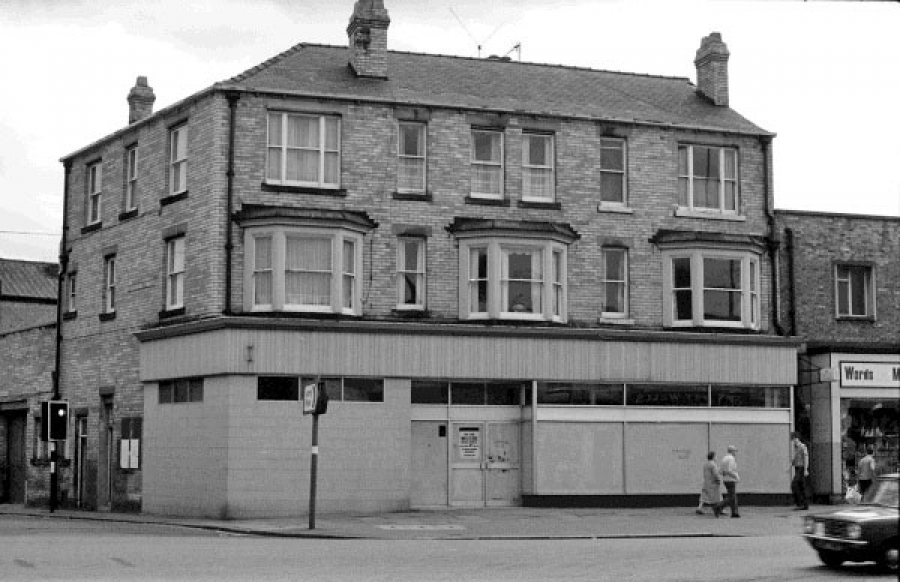