The old Salvation Army property, adjoining the former New York Hotel, was first registered in 1883 as the “Salvation Mission Hall”, to replace an older mission in the nearby Cambridge Street. The Cambridge Street mission was built on the site of a former ice-house, which also gave its name to the houses of Ice House Terrace on the north side of Cambridge Street. The new “Icehouse Citadel” on the Anlaby Road had seating for 2,500, officially registered in 1902, and by 1905 it was designated as the Hull Icehouse Citadel Co Ltd. The premises closed in 1989, when the army moved to more modern buildings in Walker Street; at that time part of Walker Street was renamed Icehouse Road. The citadel has stood vacant, awaiting demolition since its closure and recently suffered a serious fire.

Now the site of a supermarket (also closed at the time of writing) the corner of Pease Street was once the site of a long-standing Hull company, and a much-loved landmark. Russian born Jacob Goldstein had established Goldstein & Co in the late 1870s, at property in North Walls, in the old town. Leon Goldstein established a cabinet-makers company in Walker Street in the early 1880s and by 1892 they had retail premises on the Anlaby Road. In a 1905 trade directory the business was listed as the Hull & East Riding Furnishing Warehouse, Goldstein & Co, proprietors. The business survived until the 1980s when the building was demolished for the construction of a small supermarket.

The west end of Ocean Place was lengthened to the junction of Pease Street during the 1860s, by the first section of a development known as Frederika Terrace.

Several new buildings were constructed, west of the new Pease Street, in the 1860s, extending as far as the junction with Great Thornton Street. The long row of property was named Frederika Terrace and consisted mostly of houses, some of which had front gardens, and many of them later converted to shops. Some of the large buildings that adjoined Frederika Terrace became well-known landmarks on the ever-growing Anlaby Road and formed a unique line of varied architectural styles, featuring two of Hull’s ornate theatres. The area had long become synonymous with entertainment and had enjoyed a varied history of spectacle and sport.

Gleadow, Dibb & Co were the founders of the Hull Brewery, and built many imposing buildings in Hull, almost all of which have been demolished. In 1862, to the designs of architect William Sissons, they built their Malt Kiln No.4, on the Anlaby Road, to the west of Pease Street. The huge building stretched south as far as Cambridge Street and remained in use until c.1964, when it was replaced by a new and more efficient drum malting in Westmorland Street. Malting No.4 was demolished in 1966 along with the Palace Theatre.

An article entitled “New Empire Palace to be erected on the Anlaby Road” appeared in the Hull Times of 8th February 1896; the stylish theatre, designed by Frank Matcham, actually opened as the Palace Theatre in December 1897. Built immediately west of the Hull Brewery Malting, it had an impressive exterior that hid an equally elaborate interior. It was part of the Edward Moss business empire, and could seat 1,800 people and in its first month showed local films of Monument Bridge and Carr Lane using Robert Paul’s “Theatrograph”. Going from strength to strength, the premises were enlarged in 1928 but suffered badly during the Blitz of World War Two and remained closed until 1951, when it re-opened under new management. In 1957 it was remodelled and the orchestra pit, seats and many other interior fittings were removed to create a large area for tables and chairs. Following re-modelling it became known as The Continental Palace, and more familiarly as “The Palace”. It finally closed its doors in 1965 and was demolished with much of the property in this area in 1966.

In 1864, Charles Hengler opened his “Grand Cirque Variete” on former fields to the south of the Anlaby Road. Originally a circular building, made of wood, the building held 2,500 people, although plans in the Hull City Archives describe it as only a “temporary building”. Its performing season was initially short, opening between October and December each year, and showing entertainments of a mainly equestrian nature. The repetoire soon grew to include a variety of other travelling acts, minstrel shows, pantomimes and scenic shows; the building was also used for a number of religious meetings and other social functions. It was re-named Hengler’s Cirque (or Circus) from 1870 and, following another refurbishment, had a grand opening ceremony in 1887. It was re-built again in 1898 and this time in more substantial brick, concrete and plaster, with a grand entrance under a portico supported by a “colonnade of slender wooden columns”. Now simply entitled “The Circus” the new building housed the largest hall in Hull at that time.

In 1912 a miniature film factory was installed on the premises, with the intention of producing films of local events, and by 1914 boxing matches were also included on the bill. In 1918 it was re-named once again and became the Lyric Theatre, but still suffered from the success of the Palace next door, and was forced to close in 1925 only to re-open once more in 1926 as the Palais de Dance. The re-opening was again short-lived, and the old theatre closed its doors for good c.1930.

An article from Hull Advertiser of 17th June 1831 carried this report:-

“AWFUL CATASTROPHE – Yesterday, it was very sultry, with heavy clouds, and about five o’clock in the evening the atmosphere became dark in the extreme, and this town and neighbourhood were visited with a short, but most tremendous hurricane of thunder, lightning, rain and hail. The electric flashes were most terrific, and appeared not to descend but to rise out of the earth. We regret to add, that the storm was attended with fatal consequences. Mr N Marshall, only son of Mr Richard Marshall, of South Cave, had been in Hull, purchasing two wagon-loads of bones, which he had sent home; and at the moment the rain was beginning to fall, (contrary to the urgent request of Mr M Lyon, of the White Horse, Carr-Lane, where he had been stopping) he set out upon his return, on horseback. He had, however, scarcely proceeded a quarter of a mile, just off the stones, when the rain falling in torrents, he took shelter under a tree, adjoining the end of the Brown Cow, - a small white house, on the Anlaby Road, near the end of Love-Lane [Great Thornton Street]. Immediately afterwards, there was a terrific flash of lightning, which struck the tree, and the unfortunate young man, and his horse, were killed on the spot! Some of the bark on the upper part of the tree was taken off; the trunk is perforated as with bullets; and a large piece was slivered from a post beneath the tree. There are two windows at the east end of the house, in one of which two squares were broken, and in the other, nearer the tree, four squares. The landlord of the house was sat near the latter, and by force of the shock was thrown out of his chair; - the back of his neck was also scorched. The inmates of the house were unconscious of the awful results, until they heard the crying of a child, when they found that a little boy, named Topping, seven years of age, had also sought shelter under the tree, and that although he had escaped the stroke of the lightning, yet the horse had fallen upon him, and his thigh was broken” (sic).

The sad story goes on to describe the gruesome injuries to the unfortunate rider, and is the first mention in print of one of Anlaby Road’s many lost pubs The Brown Cow. The buildings occupied by the Brown Cow can be seen on maps and plans of the area from as early as 1817 when it appears to have been a farm, later added to, and converted for use as an inn or ale-house known as The Brown Cow, possibly suggesting that it had been a dairy farm or cow-keeper’s. The inn was first listed in the trade directories c.1838, but as Frederika Terrace was developed, and land in the area acquired for building, the pub closed down. The site was taken by Hengler’s Circus and in 1863 the licence transferred to the Queen’s Head, in nearby Walker Street. 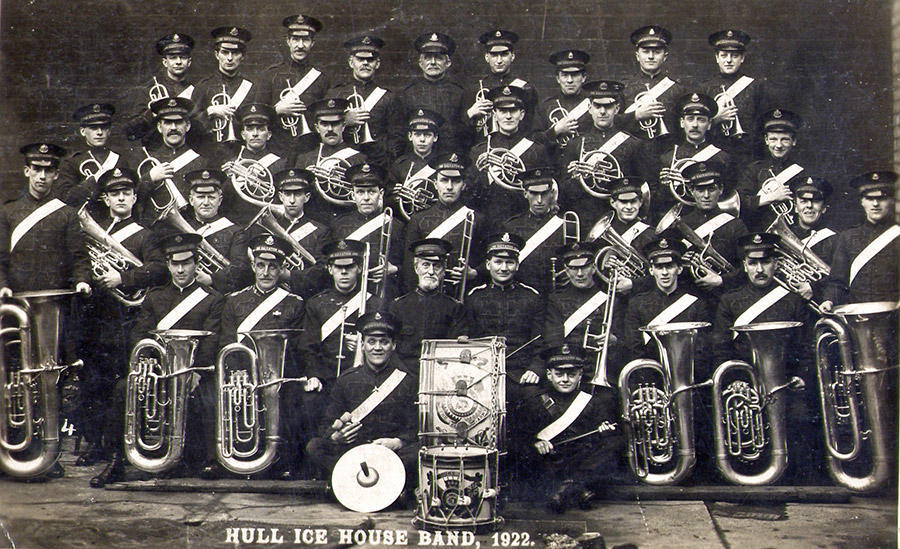 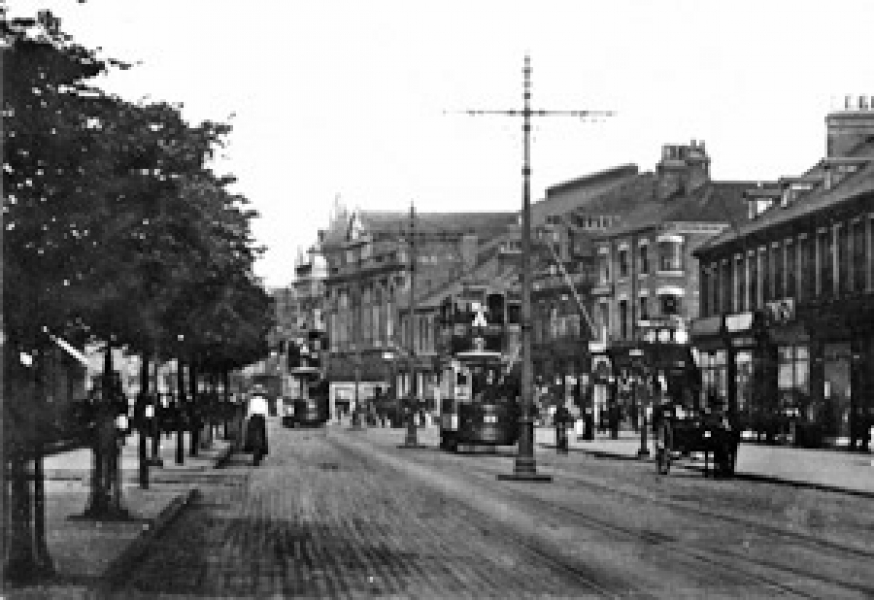 Anlaby Road with The Palace in the background. 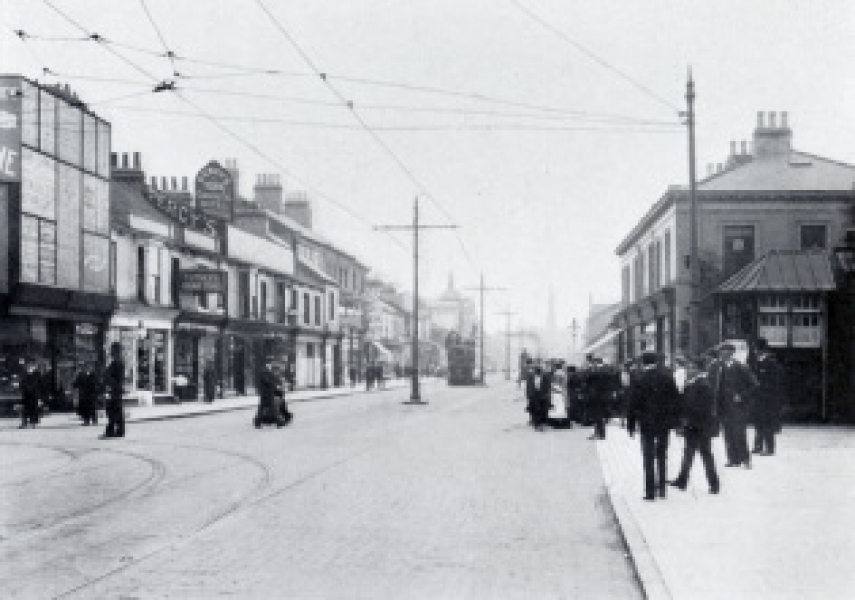 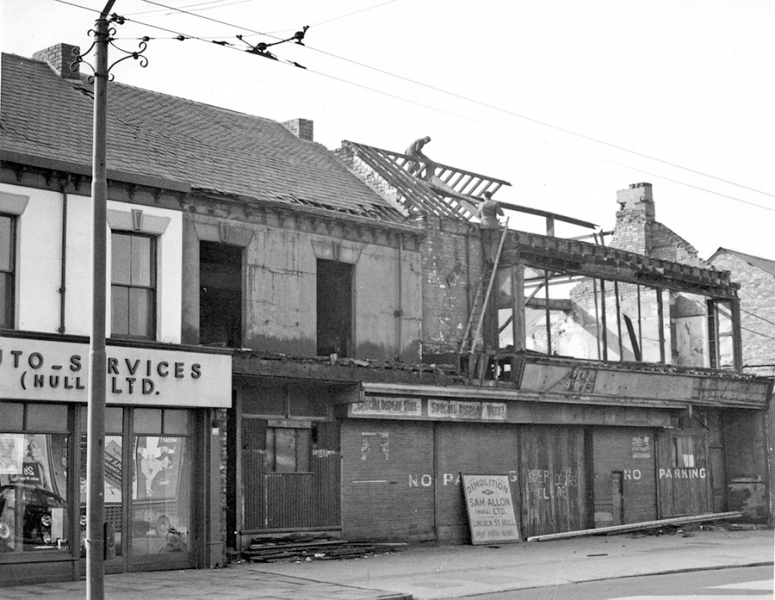