Not to be confused with the much older Old Newington Farm, this younger Newington Farm was built in the second quarter of the 19th Century. The farm was the long-time home of dairy farmer George Lonsdale, who was listed there in the 1901 Census, as a 69 year old farmer with his wife, two sons and two daughters along with one servant, who was listed as a “cattle foreman on farm”, indicating the type of business owned by Mr Lonsdale. The 1908 Ordnance Survey plan shows the farm had at least ten acres of land, extensive stables and what appears to be dairy sheds. Newington Farm was still shown on the 1928 Ordnance Survey plan of the area and was still ocupied by the Lonsdale family until the 1930s when the Dowson family took over; they were listed there until c.1939. The farm narrowly survived demolition when the Trinity House Rest Homes were constructed behind it from 1938, and was finally demolished in the early 1950s.

To the west of Newington Farm was Laurel Villa which, like Newington Farm, was constructed in the second quarter of the 19th Century. The 1901 Census recorded it as “Laurel Cottage”, the residence of Thomas Chapman, a 59 year old “general grocer”, along with his son, daughter and one servant. The 1928 Ordnance Survey plan shows the house as Glengariff, and it was clearly a sizeable property, comparable to those on the Anlaby Road near Albert Avenue, e.g. Somerset House, and the surviving Fairholme. Glengariff also survived the construction of the Trinity Rest Homes that were built behind it from 1938 and remained occupied until the early 1950s when it was demolished. Prior to its demolition The Hull Brewery Co had applied for permission to convert it into a public house, plans were drawn, but never approved, probably due to the close proximity of the rest homes.

The board of Trinity House planned new homes on the Anlaby Road in 1938 and building of the homes commenced in the same year. The outbreak of World War Two in 1939 delayed the work, and only one of the intended three blocks of flats was completed. Work resumed in earnest following the war, as both the Mariners Almshouses in the city and the Kingston Alms-house on Beverley Road, had both suffered severe damage during the war and new accommodation was urgently required. By 1951 pensioners were being transferred to the 56 new, self-contained almshouse flats, in two-storey symmetrical buildings set in their own gardens. The houses are in the neo-Georgian style and were designed by the architects F J Horth and H Andrews.

The continued construction of housing fronting the Anlaby Road, and in new streets leading off the north side during the 1920s and 1930s, brought an increase in traffic as well as a new tram route, that had been extended west to serve the new suburb. During the development of the new streets on the north side the decision was made to widen the Anlaby Road by creating a dual-carriageway; this could only be done by setting the line of the original road back on the north side, as the south side had already been extensively built upon. The road widening was carried out in 1936 creating the now familiar open aspect that the road enjoys as far as the city boundary.

Beyond the Trinity House Rest Homes is a detached house and a short terrace of three houses built in the 1920s, and including No.942, which is the vicarage of St Martin’s church. As these properties were constructed before the 1930s road widening, part of their front gardens was lost in the development of the dual-carriageway.

Beyond the junction of Ingleton Avenue to the west, are two more pairs of semi-detached houses marking the boundary of the development. The end of the block is marked by three detached shops dating from slightly earlier, and showing a distinct change in style, built of plain red brick with ornate detail at roof level. This is particularly noticeable on the corner property, a former Wm Jackson’s shop which opened in 1933.

The alignment of Norland Avenue marks the entrance road to Providence House, another of the long-standing houses lost during this period of mass redevelopment.

Providence House is shown on the 1824 Ordnance Survey plan of this area, just to the east of a lane leading north to Springhead House, on what is now called Willerby Road. The House may have been linked with Providence Mill on the south side of the road, and was occupied by farmer and cattle dealer Joseph Cape from the 1890s until the 1920s when it was still shown, relatively unchanged, on the 1928 Ordnance Survey plan. This side of the road was still mostly undeveloped at that time, but by the early 1930s Providence House had gone and the frontage of the Anlaby Road was lined with purpose built shops to serve the massive increase in population.

Amongst the shops built in the former gardens of Providence Houses was a new social centre, the Anlaby Park Social Club, re-named the Tranby Club c.1939, which retains the name “Anlaby Park Hall” inscribed in stone over the entrance. Four early 1930s, purpose-built shops lead to the end the block, with some retaining their original doors leading to the accommodation above.

The entrance to Trenton Avenue from the Anlaby Road is just east of the alignment of a lost street, known as Lodge Lane. The Lane ran north from “The Lodge”, an old property that had been left isolated on the south-west corner of Trenton Avenue as the new street was laid out. Lodge Lane ran north to the grounds of Springhead House on the north side of what is now Willerby Road, but was once known as Springhead Lane; remnants of Springhead House survive as part of the Springhead Park Golf Club. The Lodge was also known as Springhead Cottage, and survived until the 1960s, as No.311 Hull Road Anlaby, as it was situated on the Anlaby side of the boundary. The line of the old lane is still the official boundary between Hull and Anlaby, but sadly the old lodge was demolished and a car showroom now occupies the site. 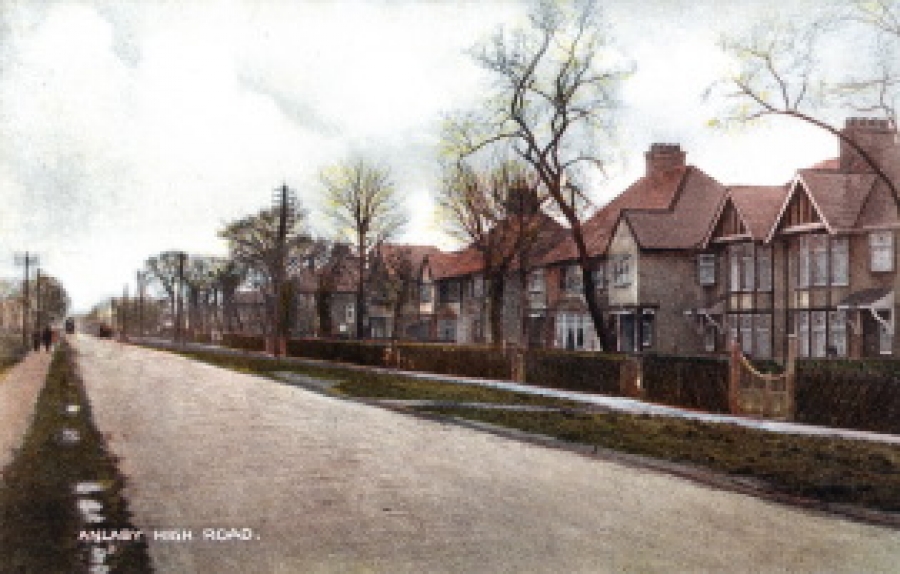