The new church was built on the site of the former rope manufactory, and was intended to replace a temporary mission hall in Walton Street, built in 1876. Building commencing in the spring of 1891 and was completed by May 1892. The church had seating for 750 people and was designed by the architect William Alfred Gelder, in the Italianate style, with an imposing facade that faced the Anlaby Road.

A temporary church institute made of corrugated iron was intended for the rear of the church but plans submitted in May 1895 were never approved. In July of the same year, new plans were approved for a “proposed Sunday School to the Presbyterian church”. Designed again by architect William Alfred Gelder, the school was more substantial, but a rather plain single-storey building. The foundation stone on the stairs within the present building states “Stone laid by Miss R Thomson on 10th December 1897; the school was still shown on the Ordnance Survey plans surveyed in 1908, but was short-lived, as by that date the small schoolrooms were found to be inadequate. The architect Thomas Brownlow Thompson designed “new schools” for the site in January 1911, the new building being much larger and on two storeys. The stone-laying ceremony was performed on 27th April 1911, and the foundation stone states that it was laid by Andrew Cochrane, of the Cochrane shipbuilding company whose home was at No.503 Anlaby Road. The school building was adapted for worship, following the demolition of the original church, which was sold in 1961 and soon demolished. A typically uninspiring 1960s shop and office block was constructed on the site in the summer of 1964 and still occupies the same unusual footprint of the old church, set at an angle to the main road. The former school building survives behind the 1960s block and is now used as The Lonsdale Community Centre, having once been the temporary home of the Hull Community Voluntary Service.

The property occupying the south-west corner of Lonsdale Street has a date stone at eaves level, which records that it was completed in 1890. This building was originally used as the retail department of a dairy, and is adjacent to two houses built facing the Anlaby Road with small front gardens, known as Lonsdale Villas; all three properties were occupied in the 1891 Census, taken in the April of that year. The 1889 Ordnance Survey plans of this area show just two other buildings between Lonsdale Street and Albert Avenue; the detached Somerset House, and a smaller house on the south-east corner of Albert Avenue.

Somerset House (or Villa) was a large detached property built c.1874, for the Hull businessman William Norman. It was set back from the Anlaby Road in its own grounds, with formal gardens front and rear adjoined by large stables; a small cottage was built alongside the house, adjoining the stable block and coach house, known as Norman’s Cottage. Curiously, the 1881 Census listed William Norman as a retired tailor and outfitter, aged 66 years, with his wife Elizabeth aged 44, and two servants living-in. Norman’s Cottage was occupied by the Norman’s gardener, Joseph Shields, aged 53, with his wife Emma, three children (one listed as a “gardener’s assistant”) and a grandson. Only Mrs Norman was listed at Somerset House by 1905, and the house itself ceased to be listed by 1910. The house was demolished for a new development by the Territorial Army, and just one gate post belonging to the former house survives at the east end of the wall, next to the Beetonsville Post Office.

The site of Somerset House was to be the location of the Territorial Army’s Wenlock Barracks and drill hall, the house having been demolished in 1910 for the development. The Hull Daily Mail of 10th April 1911 contains photographs of the opening ceremony, which took place on Saturday 8th April 1911, and the barracks continues to be used by the TAs to this day.

The 1881 Census shows no further properties beyond Somerset House at that date, the nearest building on the north side of the Anlaby Road being Old Newington House, much further west. This situation remained unchanged until c.1888, when houses were built at the junctions of Albert Avenue and De La Pole Avenue. The land between Somerset House and Albert Avenue was gradually developed in the late 1880s, the first property to be built being Bar House in 1889. Bar House is situated at the corner of Albert Avenue, and was built for saddler Daniel Reynolds, and later taken over by the National Provincial Bank c.1930, remaining as a branch of the NatWest to this day. Bar House was soon followed by the construction of Broxholme a large mansion house, designed by the architect T Brownlow Thompson and built immediately west of Somerset House in 1890; Broxholme was built for Charles Hellyer, who was a founder of the later Hellyer Brothers shipping company. Broxholme was converted for use as flats from c.1960, and demolished in Ferbruary 1982, when a block of modern flats was built on the site.The final large detached house on this block was Fairholme, designed in 1894 by the architects Freeman, Son & Gaskell, for William James Cooke (of ship builders Cook, Welton & Gemmell) and situated to the west of Broxholme. Another smaller house was built adjoining Bar House at the corner of Albert Avenue, by 1904 completing the block. Of the three grand detached houses, only Fairholme survives, although much altered through the years and under various guises it has been known as Maxim’s, the Hotel Nord, and is now a hotel and public house called The Albert.

More terraced housing and shops lined the Anlaby Road frontage beyond Albert Avenue; a block of five houses were shown on the 1889 Ordnance Survey plans running from the corner of Albert Avenue named as Ferndale Terrace. These were not listed in a directory of 1888, and must have been built in 1888/89. Also shown on the 1889 plans, was De La Pole House, a single property located further west, nearer the junction of De La Pole Avenue. The land between Ferndale Terrace and De La Pole House was gradually filled by houses, built independently of each other; Norman Villa, Erlesdene and Elm House were all built by 1892 and now appear as one terrace. By 1899 the block was complete, including purpose built shops for the Hull Co-operative Stores at No.440, and Kitchen’s Drug Stores at No.444. The whole block survives but most of the house have been converted to flats, with the larger properties at the west end remaining as shops.

The corner property, at the west side of the enrance to De La Pole Avenue, has a date stone of 1889 and continuing west, the next block of property was developed in the same period as the block to the east. Teviot House, Blair House (later a preparatory school) and Cogan House were built between 1890 and 1893, as well as a purpose built shop for John Webster. By 1899 the block was almost complete, with an adjoining terrace starting at Gloucester House (now No.454), Linden House, Gloddaeth House etc. The block was mostly completed by 1905, when the trend for naming terraces independently of the main road had all but ceased, and the houses had all been individually numbered; all of the houses are now flats and shops.

At the turn of the 20th Century the end of this block was marked by a field boundary, and open field drainage ditches still ran alongside the Anlaby Road, with small footbridges allowing safe crossing here and there. Nothing was built beyond the last terrace, and the open fields towards Old Newington Farm, for almost 30 years. The open land beyond the last terrace had been an important location for Hull’s racing fraternity. 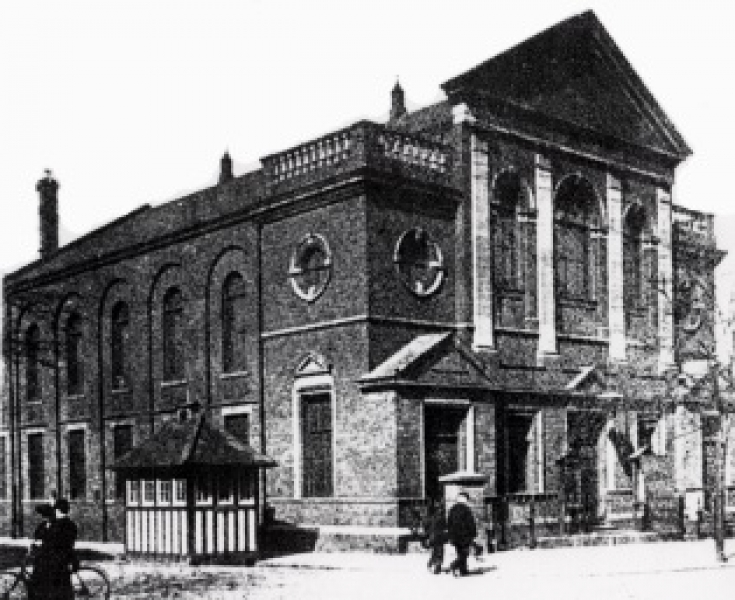