Anlaby Road has continued to play an important role in Hull’s development, being one of the two main routes into the city from the west. The damages incurred during the Blitz of World War Two caused the redevelopment of a large area, on the south side of the road, near to the city centre. The Victoria County History noted: -

“the extensive war damage made a comprehensive replanning of the town a practicable proposition. The planners had to take into consideration the lack of open spaces in the city the congestion on older industrial sites, the scarcity of sites for schools, and the acute housing shortage. Among the problems related to traffic were obstruction caused by level crossings and agricultural drains, the lack of parking facilities, the unbalanced diffusion of traffic entering and leaving the city, and the double impediment of superfluous access roads and ribbon development along the city’s principal highways.”

In the latter years of World War Two, the respected town planners Edward Lutyens and Patrick Abercrombie drew up a major scheme for redefining the whole of Hull, which - had it been even partially completed, would have caused as much devastation to the city as the war itself. Thankfully, when the plan was published in 1945, it was soon realised that the financial implications of carrying out even its main recommendations made it impracticable in the post-war financial climate. A more attainable plan was set in motion by the city council in 1956; it related more closely to the industrial needs of the town, with particular emphasis on the “journey to work”. Investigations revealed that for many people, employed in the docks, fruit markets or fishing industry, a home near to their place of work was essential. The essence of the plan was to make the fullest use of any, and all, open spaces within the city boundary, and some of the schemes completed plans begun before the war.

In addition to the many residential districts, the plan also identified areas that were to be replanned from a commercial and industrial aspect. Central Hull had two such areas, and two more were established in 1959; one of which included the obsolete and war-damaged property, between the Anlaby Road, Hessle Road and Bean Street. Demolition was hindered by a shortage of new property in which to re-house the residents left homeless by the redevelopment. This led to the familiar empty plots that sprung up around the city, some remaining vacant for decades. In a City Council report of 1960 entitled “Redevelopment of Decayed Areas with particular reference to Residential Area No.17” (the area described above), a plan was proposed to reduce the population of the whole area of 150 acres, from 9,500 to 8,200. This involved reducing the number of private dwellings from 2,500 to 2,300, the number of shops from 240 to 59, the number of public houses from 36 to only four, the number of clubs from five to two, the number of churches from six, and reducing the number of industrial premises from 91 to zero. Open space was to be increased from 0.2 acres to 7.6 acres and the area set aside for schools would be increased from 2.4 acres to 12.6 acres. Following only nine objections, seven of which were withdrawn before the enquiry following “discussions” with the council, the plan was approved in 1959. Three 15-storey blocks of flats near Convent Lane, west of Walker Street, formed the first wave of development in the Anlaby Road area, and were completed in 1964, the same year building began on a second wave of flats nearby. The two Cambridge Street tower blocks, east of Walker Street, were built by the Corporation in 1973 and were said to be the last municipal residential high-rise tower blocks built in the country. Hull City Council said at the time, “we built them because people liked them”; in reality, all they succeeded in doing was to replace horizontal over-crowding with vertical over-crowding.

The Anlaby Road continues to be redeveloped to the present day, and it is fair to say some developments have been more welcome than others. However, the financial input by the local authorities is commendable and sorely needed to maintain the frontage of the buildings, which has become somewhat dishevelled in recent years. It has become more and more difficult to glimpse any suggestion of Anlaby Road’s fine architectural heritage and, sadly, the oldest and most architecturally important buildings were swept away in the 1950s and 1960s, in the rush to clear away any reminders of the terrible damage sustained during the war. Despite public protest demolition continued with little regard for the consequences well into the 1980s, when many more historic properties were lost forever. Modern planners should take care to ensure that the few historic buildings that remain on the Anlaby Road are preserved.

The impressive buildings of the Master Mariners Almshouse were constructed for the Corporation of the Trinity House and built in two stages, 37 rooms in 1834 and a further 34 in 1837. They were mostly situated on former garden plots, acquired in the early 1820s, although their construction required the demolition of some much older property, which had stood on the site since the 1770s. Known locally as “the Ship”, the almshouses were rest homes for old, infirm and retired seamen and their families.

The main building was officially known as the Master Mariners Almshouse, and was accompanied by two separate terraces of almshouses to the east and south, known as the Mariners Alms-houses. Following the extension of the almshouses in 1848 and 1857, a terrace of six larger houses was added at the west becoming known as Trinity Square; the small eastern section was lost when Anne Street was extended north to join Carr Lane c.1885. The boundary of the property adjoined Ocean Place, which was also built on Trinity House land. Writing in his “Guide to Hull” of 1890, Edmund Wrigglesworth described the buildings thus: -

“… an imposing range of buildings, in the Grecian style, erected by the Corporation of the Trinity House in 1834. The building consists of a centre and two side wings. The entrance is under an imposing Doric pediment, supported by large fluted columns, and exhibiting in bold relief the hull of a ship. At the back of the hospital is a row of houses erected by the Corporation, and known as the Mariners Almshouses. The hospital stands well back from the street, and has a fine lawn in front.” (sic)

Most of the buildings suffered severe bomb damage in 1941, during World War Two, and were soon demolished. The few surviving, slightly larger houses forming the west end of Trinity Square (Nos. 7, 8, 9, 10 and 11), were lost when Ferensway south was made into a dual-carriageway in 1968. Pensioners from these, and other damaged properties in the city, were re-housed in new rest homes at the west end of the Anlaby Road.

The original King Edward VII pub was located in Prospect Street, now the site of what used to be Woolworth’s. This pub was demolished following damage sustained during World War Two, and re-located to newly built premises on the corner of Anne Street and the Anlaby Road, opening in 1957. Its unusual two-floor layout was designed by the architects Gelder & Kitchen, who were responsible for the whole of the surrounding block, and the construction of the pub was carried out by Quibell & Son Ltd. More recently the former King Edward VII was refurbished once more, opening as Divas Bar in April 2005.

The remainder of the land between Anne Street and the south end of Ferensway, was developed during the same period, on a plot that had been cleared of the bomb-damaged remains of the Trinity Almshouses. Shops were built in the same nondescript post-war style between the new pub and the Cecil Cinema, and have been occupied by many businesses over the years; an unusual modern development has created another pub on the block, with the opening of the Admiral of the Humber public house, in premises formerly occupied by Fads DIY store. 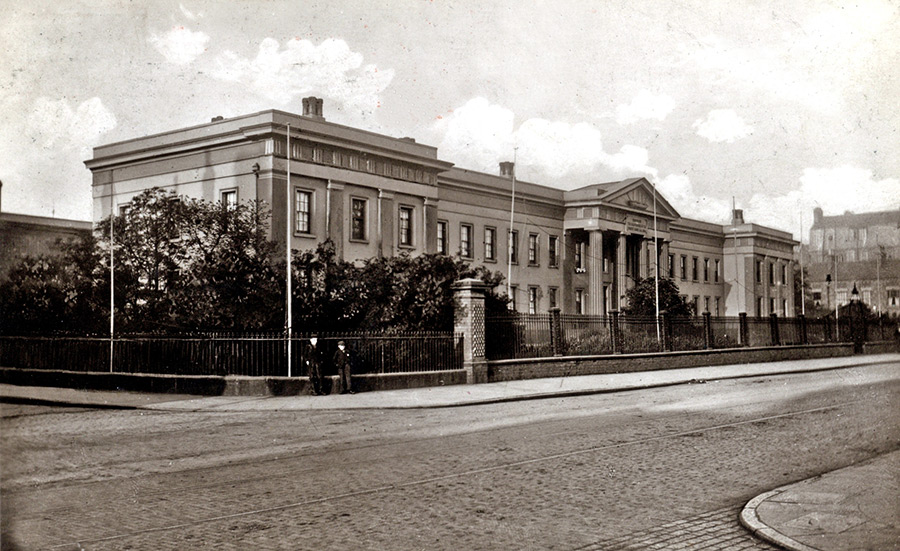 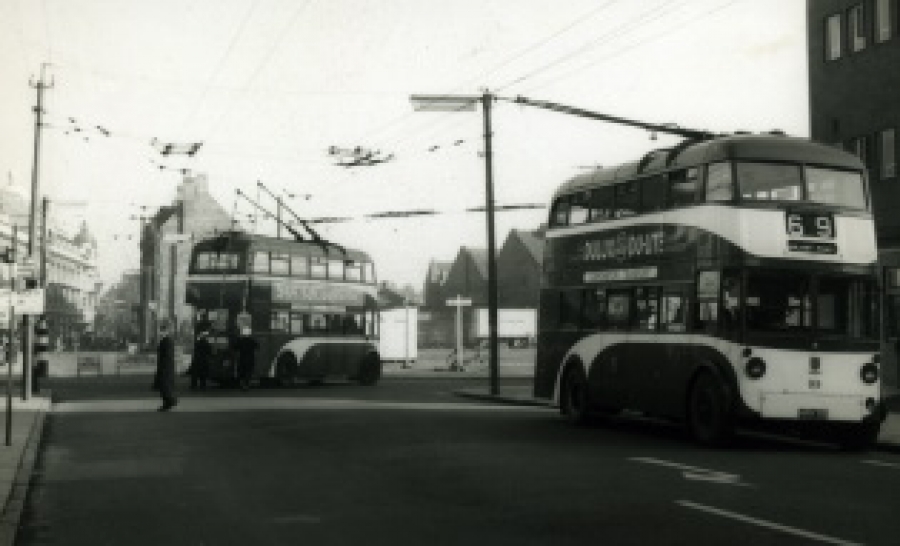 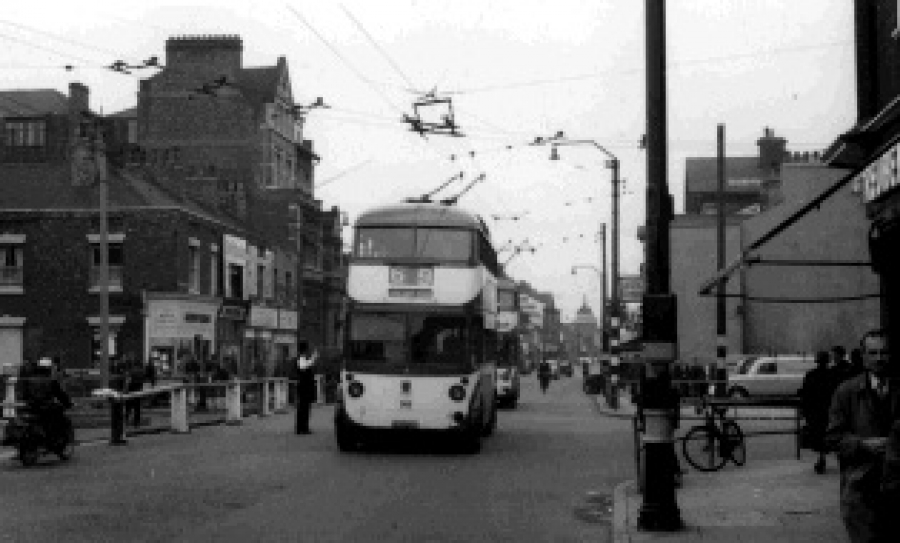