To the right, or east of the central drive, was a lake where a rustic wicker bridge led to an island feature complete with artificial rocks and mounds, some of which survive to the present day. The bridge was in need of constant repair and in 1897 the “rotten” structure was strengthened for public safety. The island was the site of the original “temporary” West Park bandstand, which was replaced with a more permanent structure in 1896. The lake was converted into a children’s play and paddling pool area in February 1957 and is now the site of an adventure playground. Two small fountains were located within the lake, either side of the island, with a third added later within the rockery area. The city engineer submitted plans for a larger ornamental fountain in 1888, basing his design on the fountains in Prince’s Avenue but these were never carried out; a smaller marble and stone fountain was purchased from the nearby Hymers College in 1893 at a cost of £10, and placed within a roundabout midway along the central carriage drive. A number of drinking fountains were also provided, the first situated south of the lake by 1889, and the second donated to the park in 1897; known as the Billaney Memorial drinking fountain, this ornate facility was erected just inside the park entrance and was similar in design to the surviving fountain in the Pearson Park. Sadly the drinking cup and chain were stolen just weeks after its erection. The fountain sustained damage during World War Two and was further damaged by a council vehicle and removed from the site.

Other attractions and facilities in the new park were several refreshment rooms, a bowling green built on the eastern boundary alongside the cricket pitch in 1894, a putting green behind the Carnegie library, and an aviary located to the north of the lake. The aviary was approved in 1889 and continual donations of rare and exotic birds kept it and the park in plentiful supply; so much so that the park superintendent was warned on a number of occasions that he must not “deal” privately in the sale and purchase of the birds. Many animals were also donated including Gazelles.

In November 1890 a local builder Mr Fred Blackburn, donated some early architectural salvage in the form of an ornamental arch and two stone doorways that had been discovered in High Street some years earlier during the construction of Burnett Avenue. The dismantled stonework went unused until March 1904, when the park superintendent reported: - “ two stone arches have laid at West Park some years, no place being found suitable for them; but if you now think it desirable, they might be placed at each entrance to the altered flower garden.” The arch and two large doorways, which could date from the 17th Century, were duly put in place at the top of the terrace adjoining the entrance to the flower parterres. One of the doorways survives as part of the children’s adventure playground. Other donations to the park included several old ships anchors; the first was donated in 1888 by B M Hellyer after one of his “fishing smack’s” - the Beta, brought it up in a trawl net off Spurn Point. Another was donated by Mr Bowman in 1889, and both were placed in the childrens play area (see page 120).

By the 1920s West Park was at the peak of its popularity and several new facilities were installed. Bowling became a hugely popular pastime and several extra greens were added along the Walton Street boundary; some years later a new pavilion for the West Park Veterans Bowling Social & Recreational club was constructed by Spooners Ltd, costing £4,000 in 1959. One of the biggest changes came in July 1929 when the Mr Thomas, the city engineer, drew up plans for a new bandstand and refreshment kiosk, as the old bandstand was in a sorry state and unfit for the demands placed upon it. Records in the Hull City Archives show that Mr Thomas obtained plans of similar bandstand structures as far afield as Glasgow, Warrington and Wakefield upon which he based his own designs. The new Art-Deco style bandstand, built at a cost of £2,500, opened in 1930; the original structure survives and is often referred to as an “open air theatre”, and may be one of the last surviving examples in the country.

The lodge at the entrance to the park was constructed in the Spring of 1902 and rented by the foreman of the park for 3s per week. The lodge was originally located within the boundary fence but the building is now in a rather exposed location as it was removed from the security of the park boundary when the fence was set back during the construction of the nearby viaduct/flyover. Thankfully, new occupants have moved into the lodge, which has stood vacant for some time. The simple wooden fence that formed the original park boundary was finally replaced in 1898, after constant tendering throughout the 1890s. The ornate iron gates, supported by brick pillars finished with stone details, were erected by Thomas Brawn & Co in the winter of 1899 at an estimated cost of £1,200, and survived until the 1940s.

In a surprising reflection of modern society the early years of the West Park were overshadowed by regular incidents of vandalism and violence. The continual theft of plants and trees, broken glass littering the park from drunks and vagrants, and serious damage to trees and property escalated to arson, when an ornamental arbor was set on fire in 1889. Crime reached a distressing peak in 1889 when several young girls were indecently assaulted on a number of occasions; thankfully, during one incident the culprit was apprehended by park staff and later sentenced to 12 months hard labour. Criminal activity in the park was so regular that in 1896 “labourers” were employed to watch over the park supported by policemen on permanent duty over weekends and busy periods; despite this, serious crime continued into the 20th Century with regular assaults and offences.

On a happier note, in recent years a much more positive climate has prevailed; the welcome input of the KC Stadium, with regular sporting, musical and social events has brought a healthy optimism to the park and a successful future seems assured.

In July 1903 the council minutes record a letter from Sir James Reckitt, stating he had been in contact with Andrew Carnegie who would be willing to donate £3,000 for the construction of a new free-library providing the council would donate the land free of charge; the motion was passed and land set aside at the south-west corner of the park. The Carnegie Library was built in 1904/05, opening 22nd April 1905, to the designs of the architect Joseph Hirst, its main feature being a central half-timbered octagonal building, with pyramidal roof. Two wings extend from the main building, one with a veranda, and internally as well as externally, the building retains most of its original detail and is a Listed Building. However, during a recent programme of closures several historic, original library buildings have been left empty and deteriorating, and open to abuse and vandalism. Help is at hand for the Carnegie Library at least, as at the time of writing a local group has formed to raise funds to purchase the building, and retain it as a heritage centre and place for historical research. The Carnegie Heritage Action Trust (CHAT) has received much support from the community whilst working hard to obtain funding to realise its ambition of saving the Anlaby Road’s only surviving library building. The Carnegie name was also immortalised in a relatively new street on the south side of the road, off Walliker Street, known as Carnegie Street.

Just to the west of the library is an historically important site on the Anlaby Road, marked by some interesting Edwardian buildings that were once the location for one of Hull’s old toll-bars. A small group of buildings was constructed at the east end of Cumberland Terrace in 1899, following a request from the Fire Brigade to the Parks Committee seeking permission to erect a “fire-box adjoining Mr Poole’s shop”. The small building formed what was known as “City Police Fire Box No.6”, and had “telephone communication” by 1900. Now a Grade II Listed Building, it originally consisted of a shed and yard, used to store fire-escape ladders etc, and the “fire box” itself; a room where police and fire service personnel could store materials, and liaise with headquarters. Unfortunately, the Listed Building status has not prevented some unsympathetic alterations by occupants over the years, as the yard has been built upon, the frontage altered and the roofing material changed. 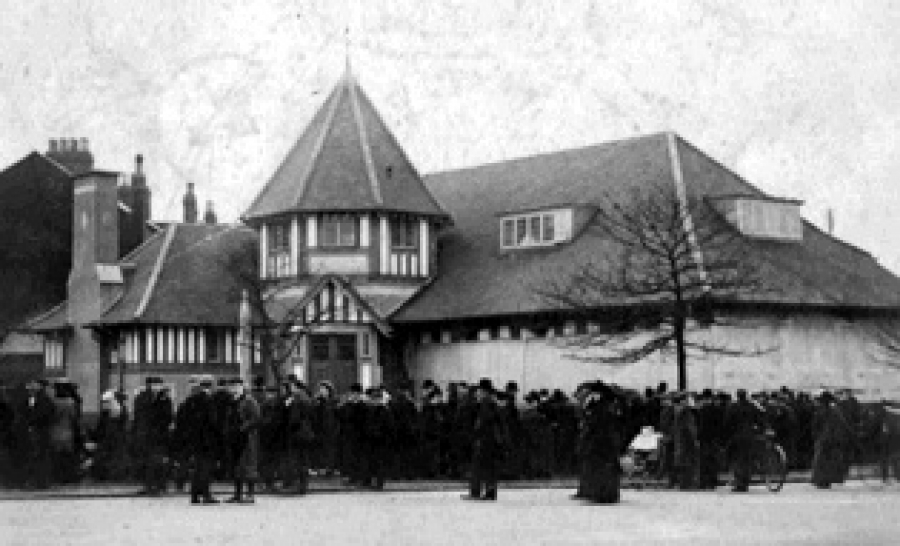 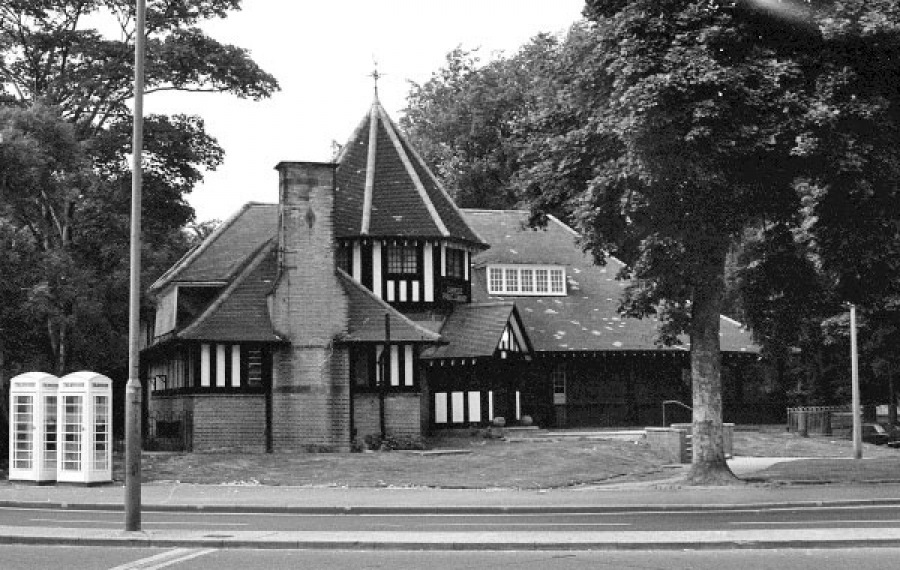 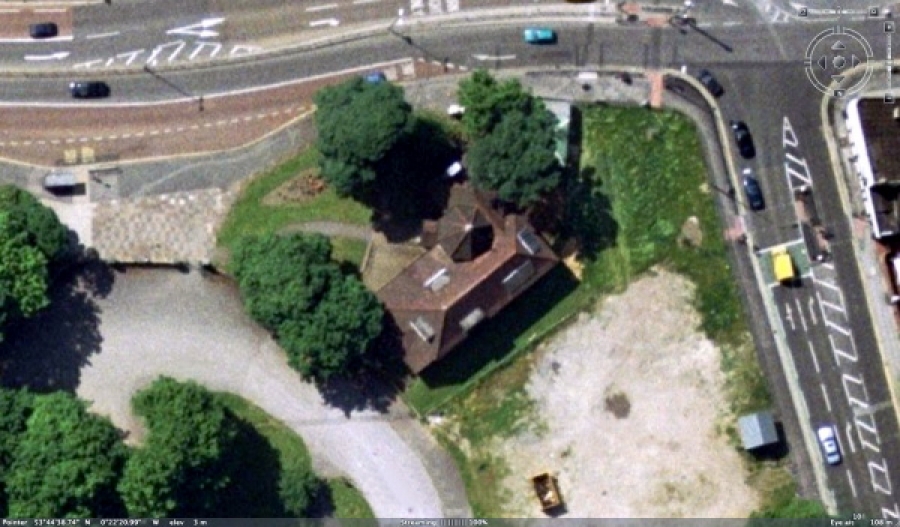