The railway line here was constructed from 1846 and crossed the Anlaby Road by means of a level-crossing. Accompanying the crossing were a small number of associated buildings, including several houses occupied by the railway company’s workers, a urinal, a signal box and a footbridge over the lines on the north side; some of the buildings survived until the 1960s. The north side of the Anlaby Road was affected by the construction of a viaduct over the railway lines begun in 1963, whilst the south side survived relatively intact. The north side was more affected due to the alignment of the road over the viaduct, which curves to the north, from end to end. The viaduct was officially opened in April 1965 as part of the council’s scheme “to abolish level crossings in the city”.

The Hull Cricket Club Ltd, had received notice to quit its old ground in Argyle Street in 1896, and played its first match against a team from Sheffield at the new pitch on 7th May 1898. The intervening years were spent removing the club’s old premises lock, stock and barrel to the new and more suitable ground on the “Stray”, north of the Anlaby Road, near to the West Park. A circle of land 180 yards in diameter, was laid out on the five acre site under the direction of the architect P Rushton. The old turf was removed from Argyle Street to create the new pitch, and a bowling green was also provided. Telephone communication was later provided at the ground, subsidised by the Daily News and Daily Mail, who used it for their reports. The Hull Brewery Co provided refreshments at the ground on a long-term, sole-rights, agreement established by Major Gleadow of the company.

The Hull Brewery tent was well-known locally as “critics corner”. Gates were constructed at the north-west corner of the site as well as buildings for storage, and stables that were home to a horse hired to pull the large roller used on the pitch; the stables were also used by the Hull (Holderness) Polo Club who practised at the ground. The ground was used for military activities during the war years, and by 1986 the County Council had taken responsibility for the Circle, their involvement leading to major improvements and many new facilities. Sadly, the old pavilion was declared unsafe and demolished in 1987; later vandalism was to become a drain on finances, resulting in the club entering into negotiations with the council during the 1990s regarding a huge new stadium facility. The last match at the Circle was on 9th September 2000, but no provision was made for cricket at the new stadium and the club amalgamated with Hull YPI in 2004 playing from the Ferens Recreation Ground on Chanterlands Avenue.

The Hull & East Riding Rugby Union Football Club used the Circle pitch under a tenancy agreement with the cricket club at the end of the 19th Century, and Hull City Football Club shared the Circle for a short period following their departure. Hull City continued to play on the Circle from c.1905 until a new ground was built adjacent a few years later; crowds of 10,000 were recorded at their temporary home. The former railway workers cricket ground was acquired for the construction of Hull City’s new pitch during the 1905-06 season and by 1907 the new stand’s initial capacity of 2,000 had been increased to 8,000; a further 8,000 were held on the terraces. Fire destroyed the main stand on Easter Monday in 1914 and major damage was caused to the offices of the club. A new stronger and safer stand, with a metal skeleton, was built during the summer. Play was suspended from 1941, during World War Two, and the ground also sustained bomb-damage; to add to their troubles Hull City were served a notice to quit their tenancy in 1943.

Hull Cricket Club started a short-lived football club of their own from 1945 but managed only two seasons. Hull City returned in the 1950s using the pitch as a training ground, and the last official football match on the pitch was played in April 1965; the ground was demolished soon after by British Rail, who extended one of their lines across the site.

In 2001 construction began on a new stadium on the site of The Circle, which took 14 months to complete and cost approximately £44million, and was the first stadium in England to be built in a parkland setting. Kingston Communications Stadium, or KC Stadium, is named after the stadium’s sponsors Kingston Communications (Hull) plc, and is owned by Hull City Council. The stadium opened its doors on Wednesday 18th December 2002 when Hull City beat Sunderland 1-0. Hull City FC (football) and Hull FC (rugby league), share the stadium, which replaced Boothferry Park and The Boulevard, grounds of Hull City and Hull FC respectively. The stadium has an all-seating capacity of 25,404, and incorporated in the complex is a 1,500 seat sports arena (known as the Gemtec Arena), a skate park, two all-weather pitches, a community learning facility, health & fitness suite, cyber cafe and a library. In 2005 Gemtec Document Network replaced Vulcan Windows as the sponsors of the arena, which overlooks one of Hull’s oldest parks.

Plans for a recreation ground and public park on land belonging to the railway company north of the Anlaby Road, were first proposed as early as 1861, when talk of the possibility appeared in the Eastern Counties Herald newspaper. A 50 acre site was finally purchased from the North Eastern Railway Company in 1878 for £1,400 per acre, and in a council meeting in March 1884 it was agreed that the land should be “thrown open to the public, with steps taken at once to use the site as a public park”. The first sod was turned by the mayor on 8th November 1884 when 32 acres of the original 50 were allocated for the park, the remaining 18 acres at the north set aside for fairs and shows. The land was levelled and huge drainage pipes laid criss-crossing the site, including four acres of grassland set aside for games and sports at the east side of the plot that would later accommodate the cricket circle and football ground.

Sir A K Rollitt, himself an Anlaby Road resident, opened the new West Park on 29th August 1885, when The Hull Critic newspaper described the Park as “the formation of an additional lung for the many thousands of inhabitants with which the west end of the town is populated”. A central “carriage drive”, 30 feet wide and 1,000 feet long led from the Anlaby Road, with spurs extending east and west around the perimeter of the park. The carriageway was complemented with several walks, flower beds and dozens of trees that were planted all around the site at a cost of £10,000. The land at the west side of the park, along the Walton Street frontage, was not initially part of the park, and was left undeveloped for many years. This land was intended for a number of villas and houses that were to be built overlooking the park in a similar way to those in the Pearson Park. The land was later taken in as part of the park and laid out as gardens and later used for bowling greens etc.

As the park opened to the public a number of locals seized the opportunity to use the carriage drive to exercise their horses, some at speed, causing constant repair and much distress to the park superintendent, whose complaints are recorded in the council minutes on several occasions throughout the 1880s and 1890s; the dangerous and damaging practice was later prohibited by law. In 1888 the central drive and the area around the lake was lit by gas lamps for the first time. At the end of the central drive were steps, complete with balustrade, leading to a raised terrace, 300 feet wide and 100 feet deep and planted with trees. Greenhouses were erected on the terraces in 1889, with others located in the north-east corner of the park next to large conservatories; initially used for the cultivation of plants, many donated by the public, the conservatories were opened to the public in 1896. 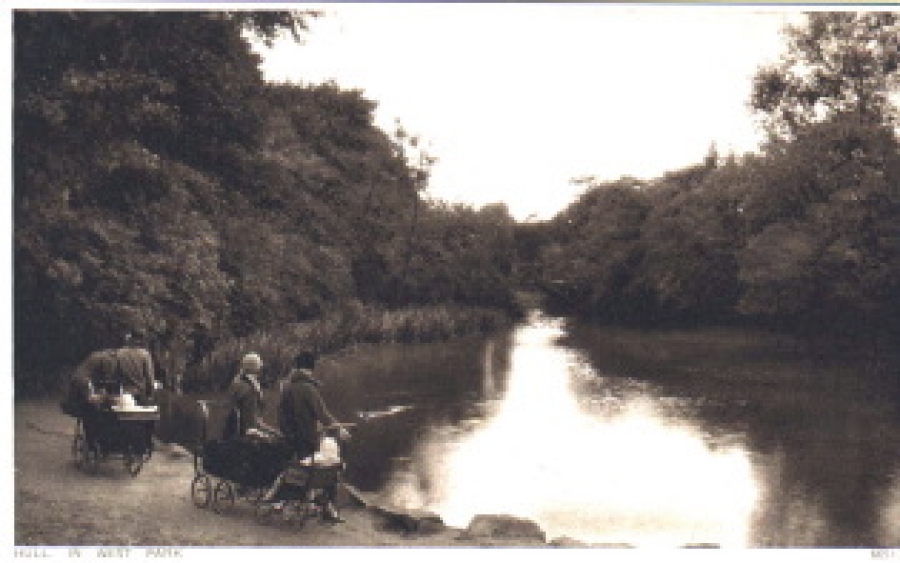