A short terrace of houses was built, fronting the Anlaby Road named West Parade Terrace, consisting of three adjoining houses, the largest situated at the corner of the new street, called Lansdowne House. Built c.1861, it was a large house of five-bays, and three-storeys high, later numbered No.178 Anlaby Road. From c.1915 it was used as a boarding house, and later became The Lansdowne Hotel, then Musgrave’s Residential and Commercial Hotel, which it remained until the late 1940s. From the late 1960s, following the construction of the Hull Royal Infirmary, Lansdowne House was used as a Nurses Home, which it remained until being damaged by fire around 1976, after which it was subsequently demolished.

At the west corner of Lansdowne Street was West Park Terrace, constructed c.1861 and consisting of five houses fronting the Anlaby Road. The terrace was interestingly named, as a new park for west Hull had been proposed in the local press during 1861, but wouldn’t be constructed for another twenty years. The houses remained in private occupation until c.1905 when the terrace was taken over by the Hull Incorporation for the Poor c.1910. The last surviving houses were demolished during the construction of the Hull Royal Infirmary in 1966/67, having latterly being used as nurses accommodation.

The present Hull Royal Infirmary is built on the site of the former Hull Union Workhouse, and its grounds, of which historian Edmund Wrigglesworth writing in 1889, noted: -

“WORKHOUSE, belonging to the Kingston upon Hull Incor-poration for the Poor. This is a very ancient institution, if not the oldest of its kind in the kingdom, and dates back to the year 1698. The old Charity Hall, which stood in White-friargate, upon the site now occupied by the branch Bank of England, proving inadequate for the requirements of the parishes of Holy Trinity and St. Mary (the only ones included in this union), the Corporation sold it, and erected the present workhouse in 1852. The building is a large and well-arranged edifice, of red brick, with stone dressings, in the Italian style. The frontage measures 270 feet in length. The centre of the front range is surmounted by an illuminated clock, and the board and committee rooms are in this part of the building: The centre of the main building is ornamented with a pediment, flanked by two towers. In the tympanum is a representa-tion, in cut stone, of the seal of the old corporation for the poor, which was placed here in 1858. This seal was adopted at a court held on the 30th of January 1698, and represents a boy spinning with a wheel, with the inscription, “ Sigillvm societatis charitativae de Hvll”, and the motto, “ Indvstria Yes parvm crescent 1698.” Behind this range of buildings is the dining hall, a fine apartment, 80 feet by 40, and affording accommodation for 550 persons. The chapel measures 60 feet by 34, and is behind this hall, but is connected with the main building by a covered way on each side. There are beds for about 700 inmates. The wards are well ventilated, and proper provision is made for separating the various classes of paupers. The board room is neatly furnished, and contains an excel-lent portrait, by Abbot, of the late Alderman John Fountain, who for 21 years was governor of this incorporation. There are two infirmaries, and a building for cutting timber into firewood, erected at a cost of £800. There are also numerous courtyards, kitchens, and ornamental gardens. The whole covers an area of about 62 acres of land” (sic).

The workhouse, later the Kingston upon Hull Incorporation for The Poor - Poor Law Institution, was described further in a report compiled for the Hull Rotary Club in 1928: -

“Character of work - the administration of the Poor Laws, and the relief of all destitute persons within the area. Inmates certified as fit for work by the Medical Officer are required to work, usually helping in the kitchen, bakery, stores, bedrooms, and cleansing generally. Others are occupied in firewood making and wool flock picking (all beds have flock mattresses in House Main Block) In the case of a sick person, a Relieving Officer gives an order for admission (also provides cab or ambulance), generally after a medical certificate has been received from a medical practitioner. The Relieving Officer has power to admit to the Institution in case of sudden and urgent necessity. There is provision for the admission of patients who reside within the area of the Incorporation, and who require definite hospital treatment (not chronic or senile cases) as “paying patients” on payment of £l-lls-6d per week. Such patients are treated in the ordinary wards along with the other patients.”

The historic buildings were re-named the Western General Hospital after 1948, by which time there were just 360 beds, and by the late 1950s it was obvious that the buildings had become unfit for their purpose. Demolition of the site began in 1963 and a new 13 storey hospital was constructed, to the designs of the architects Yorke, Rosenberg and Mardall, opened as The Hull Royal Infirmary by Queen Elizabeth II in June 1967. Some of the older buildings remain behind the new building, which has been complemented by a number of new developments in recent years.

When the original workhouse was constructed in 1852, very little property existed beyond it to the west; only open country except for a solitary railway building at the level-crossing, the turnpike keeper’s cottage at the corner of Walton Street, and a few sporadic farms nearer the village of Anlaby. The land around the workhouse remained empty until a series of new streets were laid out in the 1860s, one of which followed the alignment of a footpath leading north from Anlaby Road, to an asylum that was established there some years earlier.

On the east corner of Argyle Street and the Anlaby Road, was an interesting cluster of street furniture; a cabman’s shelter was located at the roadside, with a seat set in to the wall of the workhouse, alongside the footpath. Both of these enabled passers-by to take advantage of a drinking fountain, also set into the wall at this point. This was one of earliest street drinking fountains in Hull, and was presented to the town by the aptly named Alderman Fountain in 1858.55 Situated at the opposite (west) corner of Argyle Street, was Argyle House, built c.1868 as a large five-bay house adjoined by a terrace of smaller, three-bay houses, known as Crown Terrace. Later known simply as No.190 Anlaby Road, Argyle House was home to surgeons and doctors until c.1915, when it was taken over by the National Union of Railwaymen’s Institute, which it remained until the 1950s when it became known as The Argyle Club for some years. From the late 1950s it was converted to flats, which was to be the fate of most of the terrace. Sadly, Argyle House was demolished in October 1975, when the site was used as a car showroom, with portions of the demolished walls of the house surviving around the perimeter. The entrance of the Hull Royal Infirmary car park now marks the site.

Crown Terrace consisted of six houses built c.1868 adjoining Argyle House, and another four further west beyond a church that intersected the terrace. Crown Terrace had been converted, mostly to offices, by the 1920s, and was home to the St John’s Ambulance Brigade, and other welfare organisations. Latterly, the fine Victorian house adjacent to Argyle House was home to auctioneer Gilbert Baitson’s Edwardian Auction Rooms, with it’s familiar Hull landmark of a statue resembling King Edward VII, in the front garden. 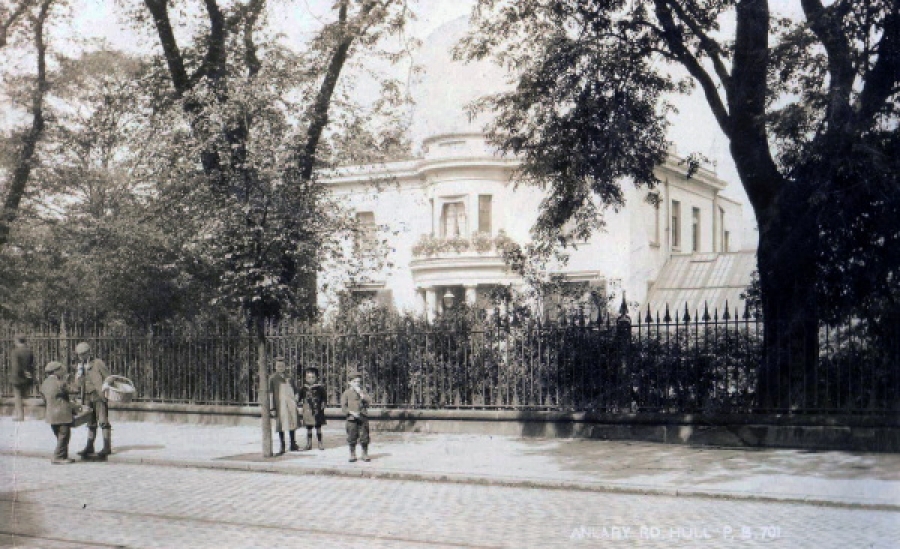 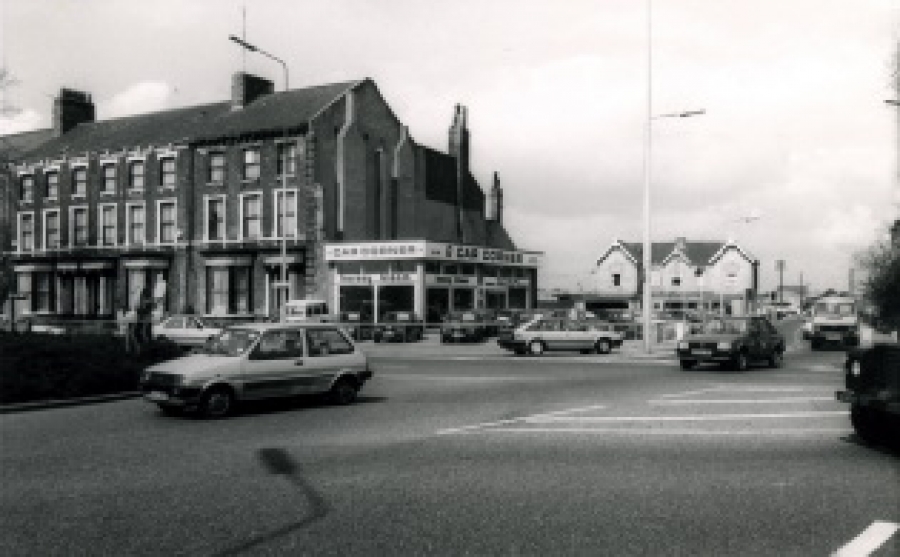