One of the oldest buildings along this stretch of the Anlaby Road was an old farm house dating from the end of the 18th Century. This was named Albert Cottage, and amongst the farm’s outbuildings was an ice-house, for keeping foodstuffs fresh - an uncommon luxury at that time, which features on the 1853 Ordnance Survey plan of the area. The site of Albert Cottage was the location for the North Eastern Railway Emigrant Waiting Rooms, designed by Thomas Prosser, that were constructed at the end of Regent’s Terrace in 1871. The waiting rooms, having been enlarged in 1881, were used by mostly northern European emigrants, 2.2 million of which passed through Hull on their way to America, Canada and South Africa between 1850 and 1914. Many remained in Hull, particularly some Jewish immigrants who lived in the immediate Anlaby Road area, accounting for the many Jewish shop names that remained until very recently. In April 1953 the redundant rooms were re-opened as the Paragon Institute, a social venue for railwaymen and their families, replacing temporary rooms at Dairycoates. The buildings now house the Tigers Lair public house, a favourite haunt of Hull City supporters, which opened in 2003.

A number of small, single-storey, “shacks” were situated along this north side of the Anlaby Road, and were home to many small businesses until the land was redeveloped from c.1902. Entertainment featured highly in the area, and several photographers premises were located here, many no doubt hoping to catch trade from the Paragon Station, who’s main entrance was then the Anlaby Road. A small mission hall was also founded here, named the Wilberforce Mission Hall, opening c.1883 with seating for 400; the mission was short-lived and had gone by 1900. The site of some of these buildings was, in part, taken by another of Hull’s many small cinemas.

An open-air cinema in Hull would seem an unlikely enterprise considering the British climate, and indeed the Garden cinema lasted just four months, between July and October 1912. Situated on open land to the west of the Emigrants Station, the short-lived cinema was managed by one Arthur Graham, but a slightly more successful enterprise was to take place on the same site some years later, known as The Pavilion Picture Palace. Every garden should have a pavilion, and the Pavilion Picture Palace opened on the site of the former Garden Cinema in the summer of 1915, situated between Nos.88 and 90 Anlaby Road. Sadly it became the victim of an area already laden with places of entertainment and cinemas (Hull had 29 cinemas in 1914), and the Pavilion closed in 1917. By 1921 it had become the Pavilion Dance Hall, and a Billiards Hall by 1928, remaining in use until World War Two. It became derelict following the war, and was finally demolished in 1965.

It is sad to think, that where only industrial and commercial buildings now line the Anlaby Road, there were once fine Victorian terraces. The area was seen as a very desirable address, and historian James Sheahan writing in 1863 – literally as the area was being developed, noted “during the year 1863 the footway on the north side of the road was widened and re-paved and a long row of trees (chestnut, lime, Turkey oak and sycamore) planted within the kerb line”. Sadly, some of these trees have outlived the houses, which they once overlooked. Small businesses gradually took over the houses fronting the road, many linked directly to the transport industry and motor trade, and by 1939, few houses were privately occupied. This section of the Anlaby Road was badly affected by the bombing raids of World War Two, and most of the damaged property was swept away in the late 1940s and early 1950s. This gave the motor trade room to expand, and expand they did; Cornelius Parish Ltd built vast new showrooms and garages that extended across the site of Elm Tree Terrace and the next block west of Wilberforce Street - Tremayne Terrace. Constructed by Fenner, Panton & Co, the new buildings opened in August 1953, and occupied Nos.126 to 140 Anlaby Road. Their “Regent Petrol Forecourt” offered fuel 24 hours a day, seven days a week; obviously not such a modern concept.

Beyond the ropery upon which Wilberforce Street was constructed, was one of the Anlaby Road’s lost pubs. The Ship Launch was originally the home of a gardener, whose grounds and orchards can be seen on the 1853 Ordnance Survey plan (see page 91). By 1814, the gardener had supplemented his income by opening an ale-house on the site, no doubt enjoying good trade by offering his pleasure gardens for promenading in the fresh country air. The pub and gardens closed in December 1855 and the land was redeveloped for housing.

Soon after the Ship Launch pub was demolished, new building was underway and Tremayne Terrace was constructed facing the Anlaby Road; the terrace was occupied by the time of the 1861 Census, and consisted of eight houses stretching to the corner of Fountain Street, with six more beyond the junction. A suggestion for this unusual name is offered within the Arlington Street description. The houses in Tremayne Terrace were also damaged in World War Two, mostly by the blast from bombs hitting the opposite side of the Anlaby Road.

Tremayne Terrace continued beyond the Fountain Street entrance, with a further five houses, three of which (Nos.142 to 146 Anlaby Road) survived until the 1970s. The end of Tremayne Terrace adjoined Balmoral Terrace, which consisted of three houses east of Arlington Street, and five houses to the west, all constructed in the same development c.1862. The terrace may have been named in honour of Queen Victoria’s royal retreat in Scotland.

Balmoral Terrace continued west of Arlington Street, with a further five houses, but could only extend as far as the grounds of a large detached house. The house had been established many years earlier, c.1812, with the development of West Parade, and built for a “gentleman” Mr Aistroppe Stovin. 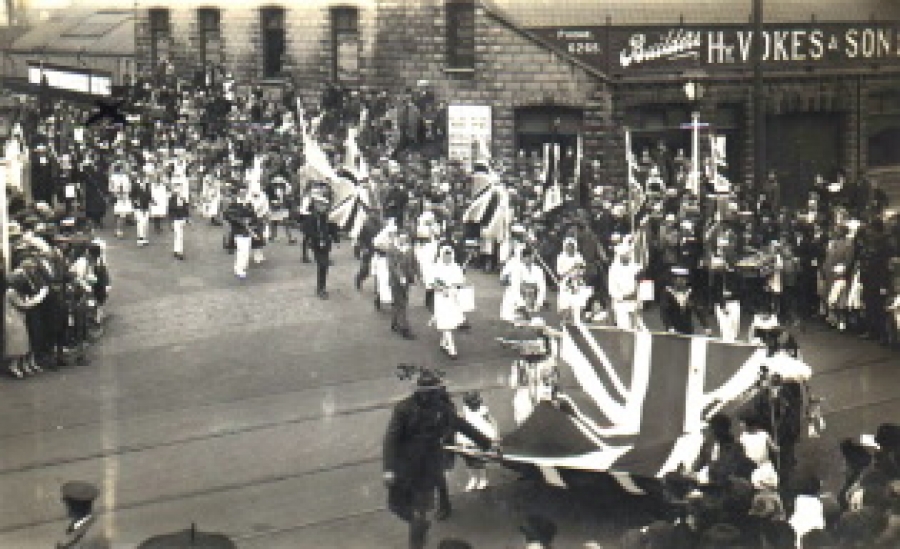