Amongst these developments were the Lee’s Rest Houses, built in 1914-15 to the designs of the architect Henry T Hare. Dr Charles Alfred Lee (1825-1912) left funds of £200,000 from his estate to build a complex of 16 detached blocks, each containing eight flats. The buildings are Neo-Georgian in composition, and are arranged around a spacious quadrangle of grass and gardens, with a central pavilion containing a reading room and clock tower with cupola. The homes were intended as charitable housing for the elderly and initial stipends paid to those lucky enough to qualify for entrance were ten shillings for a single person and twelve shillings and sixpence for a married couple. Applicants must have resided or carried on business in Hull for five years preceding their application, and a 1928 report noted that no person was accepted who had been in receipt of Poor Law relief (other than Medical Relief) at any time within two years of his or her application. A distinct preference was given to those who have been in better circumstances and in good positions, but who through misfortune or sickness, had been reduced to poverty or comparative poverty. The enclosed area that houses the buildings remains a spacious, attractive and very peaceful place.

In 1832 Hull merchant John Hudson bought a plot of land to the south of the Anlaby Road and by 1838 he secured the land that separated it from the main road and built a house to the rear of the plot. Hudson made his living as an importer of leeches and sponges, trading as John Hudson & Son, with business premises in Castle Street and George Street Hull, and an office in London. His private residence was at No.11 Charlotte Street at this time and the fine house he had built, initially known as Spring Cottage, appears to have been only a weekend retreat. Spring Villa was sold to John’s son Michael Duckett Hudson in 1856, and there is evidence to suggest that the family also had business interests at the house; the 1853 Ordnance Survey plan shows large Leech Ponds alongside the house, built around a central island. Michael had been resident at Spring Villa since c.1848, and was listed there until c.1857 when he moved to Pryme Street in Hull (Michael died in 1884); John remained in Hull throughout, and the business appears to have ceased trading c.1860. Spring Villa was later occupied by a variety of businessmen including a lead merchant and a doctor, the last occupant leaving c.1905 when the house and grounds were sold off to property developers The City Land Syndicate Ltd of Hull. The house survived until c.1910, but by 1912 the syndicate planned a new housing estate of 650 houses for the site.

Little remains of Spring Villa except for the former gatehouse or lodge, which can still be seen at the entrance to The Greenway. Dating from the construction of the original house of c.1840, it is the oldest surviving building in the area and in its time has been used as an estate office, a Post Office and a newsagents, although it is now a private residence, No.2 The Greenway. Following the curving road south from the lodge, it is possible to get a feel for the size of the former house and grounds, and some original trees survive within the central recreation area of what is now Anlaby Park.

The Anlaby Park estate was developed from 1911 onwards on the former grounds of Spring Villa, and was originally referred to as the Garden City Estate, amongst other titles. The layout and initial housing on the estate was by the architects Runton & Barry, who used many of the ideas they had developed in an earlier project at the Garden Village in east Hull. The housing is formed around a central green area, with typical detached and semi-detached houses in a mixture of popular styles of the period, including some Mock-Tudor, half-timbered houses with jettied gables, reflecting many housing estates then under construction throughout England. An advertisement for the “Anlaby Park Garden Suburb, near Hull” appeared in a local publication “Hull by Pen and Picture” c.1914, which described the new suburb as: -

“in the country yet near the city. Trams only twelve minutes walk away. New motor buses pass the estate about every half hour. Attractive semi-detached houses are ready for occupation on this charming estate with its fine old trees and pleasant surroundings. Other houses can be built to order by good contractors. Plots of land for sale – freehold and cheap. Recreation ground now being prepared; Bowling green already in use; private school now open; gas lamps on the estate roads; Hull water supply; latest drainage system; the rates are only about one-half the Hull rates’ why pay rent when you can buy these houses on terms which are as easy as paying rent? No vexatious restrictions.”

The Anlaby Park estate continued to expand into the early 1920s by which time it had become fully developed.

Here is The Greenway

The Anlaby Road – North Side

From South Street westwards as far as Park Street, open fields dominated the area apart from two isolated properties, probably farm buildings. From c.1845 however, a new terrace of property was developed on this north side of the Anlaby Road that was to be named Regent’s Terrace.

An 1846 trade directory noted that all of the 14 houses in the new terrace were occupied, including a variety of trades from solicitors to butchers. Built as private housing, the terrace was mostly made up of three-storey town houses, some of which had small gardens front and rear. Several more houses, offices and shops were added to the terrace as it grew east and west, gradually extending over an old stone mason’s yard that had occupied the corner of South Street since c.1800 (e.g. “three new houses in Regent’s Terrace”, noted in the building control registers in 1863, and new premises built for the chemist and druggist William Hay in 1870).41 Regent’s Terrace extended beyond the entrance gates and grounds of the Paragon Railway Station, although by just four properties. Its further development was cut short in 1871 by the construction of the North Eastern Railway Emigrants Waiting Rooms.

In 1875 a large detached property was built between the longest terrace and the gates of the Paragon Station; this was Dunallen House, originally the house of doctor, and later divided as the joint residence of two dentists. The house was relatively short-lived, as it was replaced by the surviving College of Art, constructed in 1904. 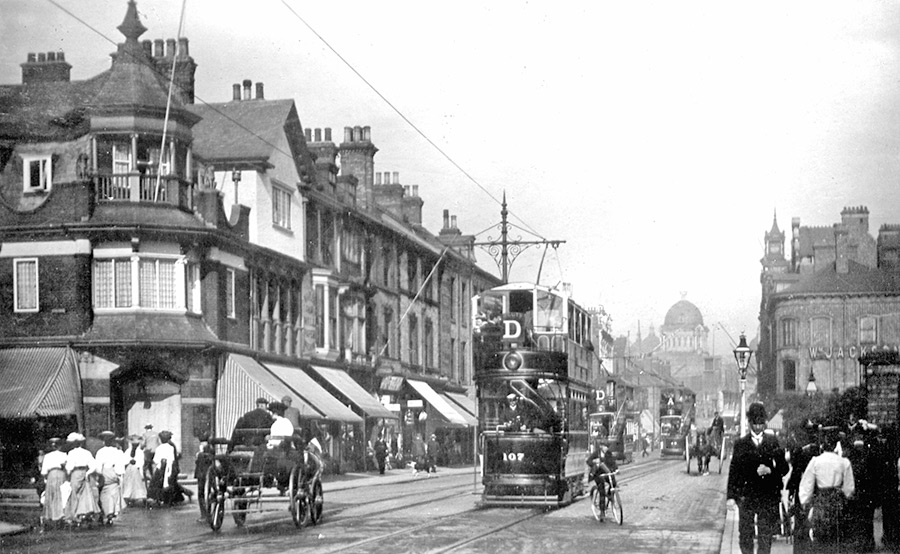 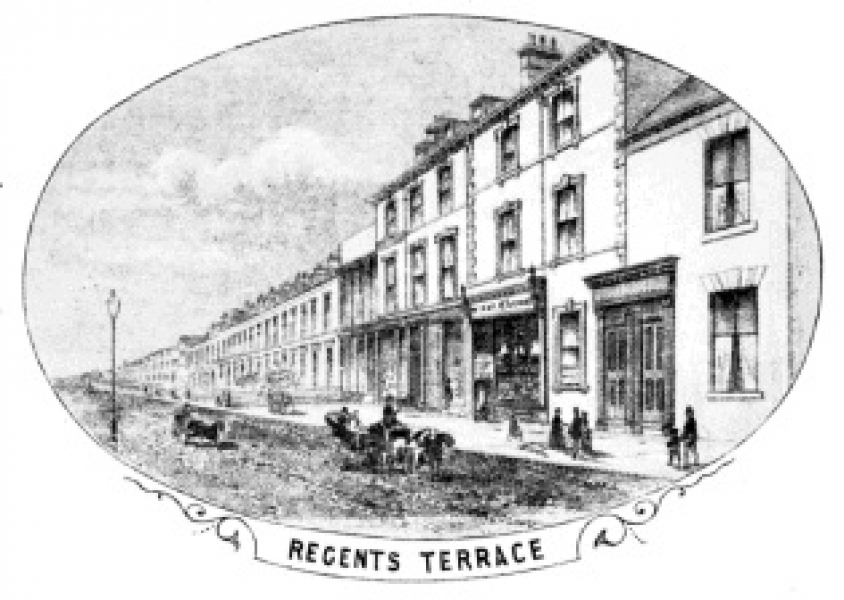 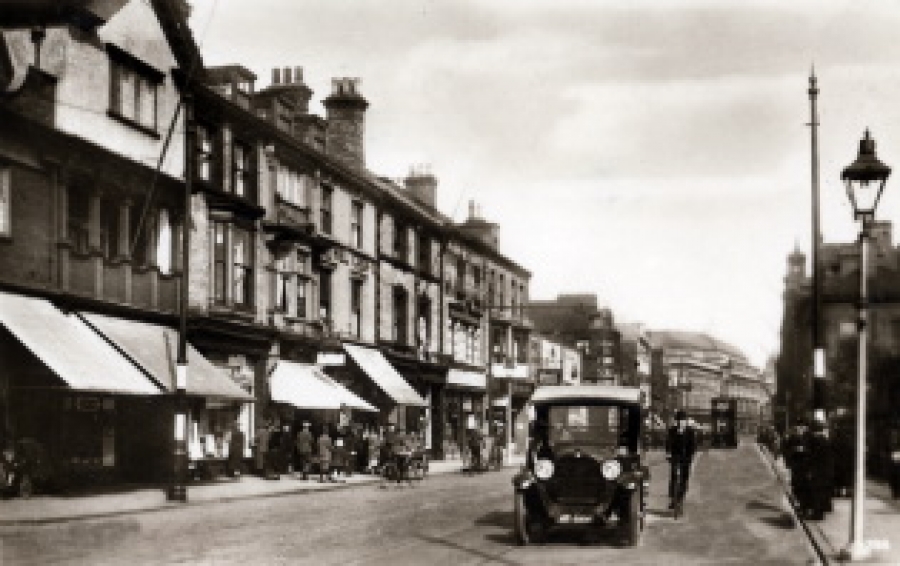