The 1889 Ordnance Survey plan shows four houses to the west of the St George’s Road junction, built in two semi-detached pairs. These were constructed c.1874, as part of the same development as the matching houses on the opposite corner of St George’s Road. They were named on the plan as Granlien, Avenue House, Freshfield and St George’s House, later becoming Nos.501, 503-505 (Avenue House was divided into two residences), 507 and 509 Anlaby Road. Granlien, the first house in the block, was vacant by the late 1920s, but had become The Hull Social Hall Ltd by 1937. By 1939 it had been demolished, and rebuilt in the neo-Georgian style, as a branch of The Midland Bank. The former bank, and No.503 next door, are now the location for The Griffin public house, which opened c.1995. The Griffin has more recently become known as The New Griffin, having undergone a substantial refurbishment. Master mariners and ship owners occupied several of the other houses; William Gemmell, of shipbuilders Cook Welton & Gemmell, lived at Freshfield (No.507) from c.1904 until the 1920s. During the 1930s it was listed as The Sandringham Club, and since c.1960 it has been home to the Humber St Andrews Engineering Company’s Social & Recreation Club, continuing the shipping link. The club also occupies the adjoining St George’s House, (No.509), which during the 1870s was the home of William Parkinson Garbutt, the father of David Parkinson Garbutt – the developer of the large “Avenues” estate on Prince’s Avenue. Between 1896 and 1899 a further seven properties were built adjacent to the grand houses, leading to the corner of Plane Street. They were built as houses, with gardens front and rear, but the whole terrace appears to have been converted to shops soon after building.

Beyond Plane Street, the remaining open field was soon taken in by the growth of Hull, and its new suburb Newington. At the time of the 1890 Ordnance Survey plan only two houses were shown between Plane Street, and the much older Hawthorn Avenue; Mascotte House, and one of the Anlaby Road’s famous “lost houses”, the grand Newington Hall. Mascotte House (No.535) lies just west of Plane Street facing De La Pole Avenue, and was listed as the private residence of fruit merchant Henry Koser in 1885, having been built just a few years earlier. Built of three-bays, with brick quoins and entrance canopy supported by Corinthian columns, its deceptive frontage hides a quite shallow house, never the less, it is a fine surviving example of the period, and now unique on the Anlaby Road.

The land to the east and west of Mascotte House was rapidly developed during the next decade and by the late 1890s the frontage of the Anlaby Road was almost complete, with more large houses and terraces interspersed with several new streets. Two houses designed by the architect James Adamson were built adjoining Mascotte House to the east in 1894, one of which survives; a seperate terrace was built to the west of consisting of four fine houses leading to the corner of Melrose Street. These were built in 1896 to the designs of the architect George Thorp, but are now mostly converted to flats.

The four houses east of the Melrose Street junction are matched by five identical houses to the west, forming a uniform terrace through to the junction of Glencoe Street, constructed in one late 1890s development. The once desirable houses facing the Anlaby Road would have looked across open fields when built, but are now converted to flats and small business premises. It is interesting to note, that the Anlaby Road had been re-numbered by 1897, and the new houses and terraces built here were no longer given individual names, as had previously been the norm, but were simply numbered consecutively, from east to west in the manner we are now familiar with. This was the case with many of Hull’s streets and roads, and was most likely a recommendation of the Post Office.

The entrance to Glencoe Street has four identical houses on each side, which adjoin the similar houses at the entrance to Melrose Street, forming an impressive terrace; these were built in 1898 having been designed by the architect James Adamson. More modest housing and shops were constructed adjoining the terrace c.1910, extending to the newly constructed Stirling Street; two of the shops have more recently been utilised for a modern public house development.

Opening in September 1988, the Malt Shovel public house was converted from a former shop/cafe in the terrace of property between Glencoe Street and Stirling Street. It’s popularity has led to it being refurbished on a number of occasions, more recently expanding to take in an adjoining

Newington Villa, later known as Newington Hall, was built c.1842, for James Hodgson, a successful Hull bacon merchant, the house becoming known locally as “Bacon Hall”. The grounds and outbuildings were extensive, and included lawns, a paddock, pond, aviary, kitchen garden, coach house, stabling and a cow house. The grand house, and a small cottage within its grounds known as Newington Hall Cottage, were still occupied in 1905, but what had once been an isolated country residence had become hemmed in by quite modest housing, and was no longer a desirable address. The last owner was a timber merchant, John Watt, who sold the house and estate in 1908 when it was subsequently demolished; new housing had been built on and around the site by 1910. It is said that the builder who bought and demolished the house made a profit just from the sale of lead from the roof.

Two large, semi-detached, houses face the Anlaby Road to the west of the Stirling Street entrance; their large size and design is at odds with the more modest housing that surrounds them and they have a strange alignment, laid out at an angle to the main road. When built, c.1895, the houses were named Halsbury and Everest Lodge, although Everest Lodge has since been re-named Sherwood House. The houses were built within the boundary of the Newington Hall estate, and it appears that a large portion of the grounds, at the west side, was sold for development much earlier than the hall and buildings. The two houses stood alone on the Anlaby Road frontage until a terrace of shops and houses was built from the new Stirling Street junction in 1909. The plot west of the two houses, at the corner of Hawthorn Avenue, remained empty until after World War Two.

More houses were constructed along the Anlaby Road frontage, extending to the corner of Wheeler Street, c.1920.

Beyond the corner of Wheeler Street is a short line of nine shops and houses that were constructed in the 1890s, extending as far as the tram shed, railway lines and level-crossing. 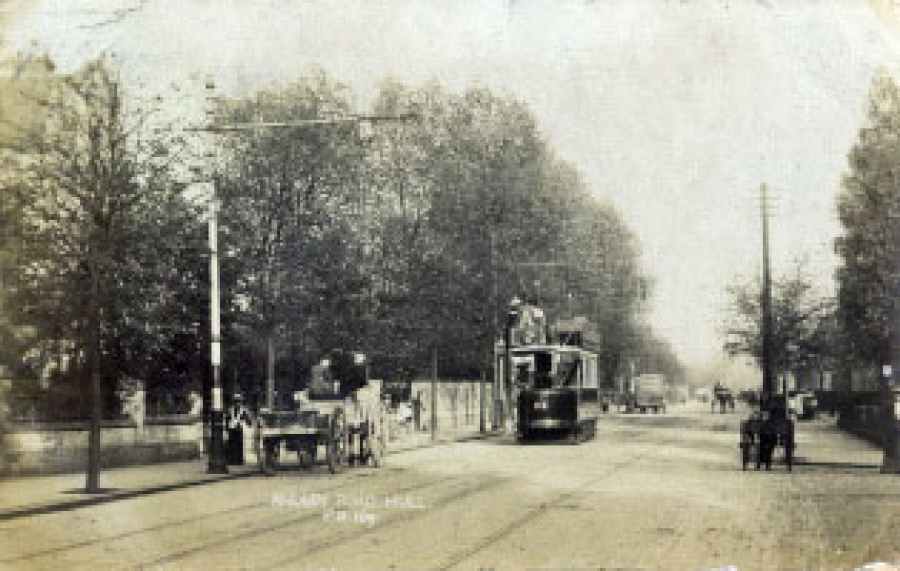