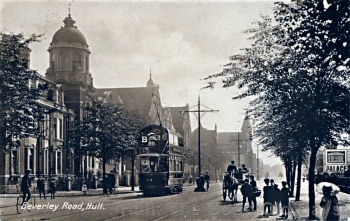 Previous Talks we have had.

Cod Wars and the Cold War

Lia Nici and the Carnegie Volunteers

The Stories behind the Wartime plane crashes on Hull

His book is on sale at the Carnegie Heritage Centre @ £5.00

The Stathers of Spring Bank

The History of Reckitt Benckiser

With Steve Scott and Rosina Baxter

The Rise and Fall of Hull General Cemetery

From December 2019 we will not be holding any more Sunday afternoon talks or Tuesday evening talks.

This is due to the poor turnouts we have been having (apart from Pete Lowdens talk on Spanish Flu!)

The Wednesday morning talks will continue on the second Wednesday of the month, topics are below.

When we are told by historians that in the past women mostly stayed home, we don’t tend to expect to find women outside the domestic sphere.

But I looked for women in the historical records, and found women criminals,heads of religious houses, major landowners, farmers, and in many occupations.

You just have to look for them.

Avenues Centre- Past and Future of an Industrial School for Girls.

the social impact of Methodism in Hull.