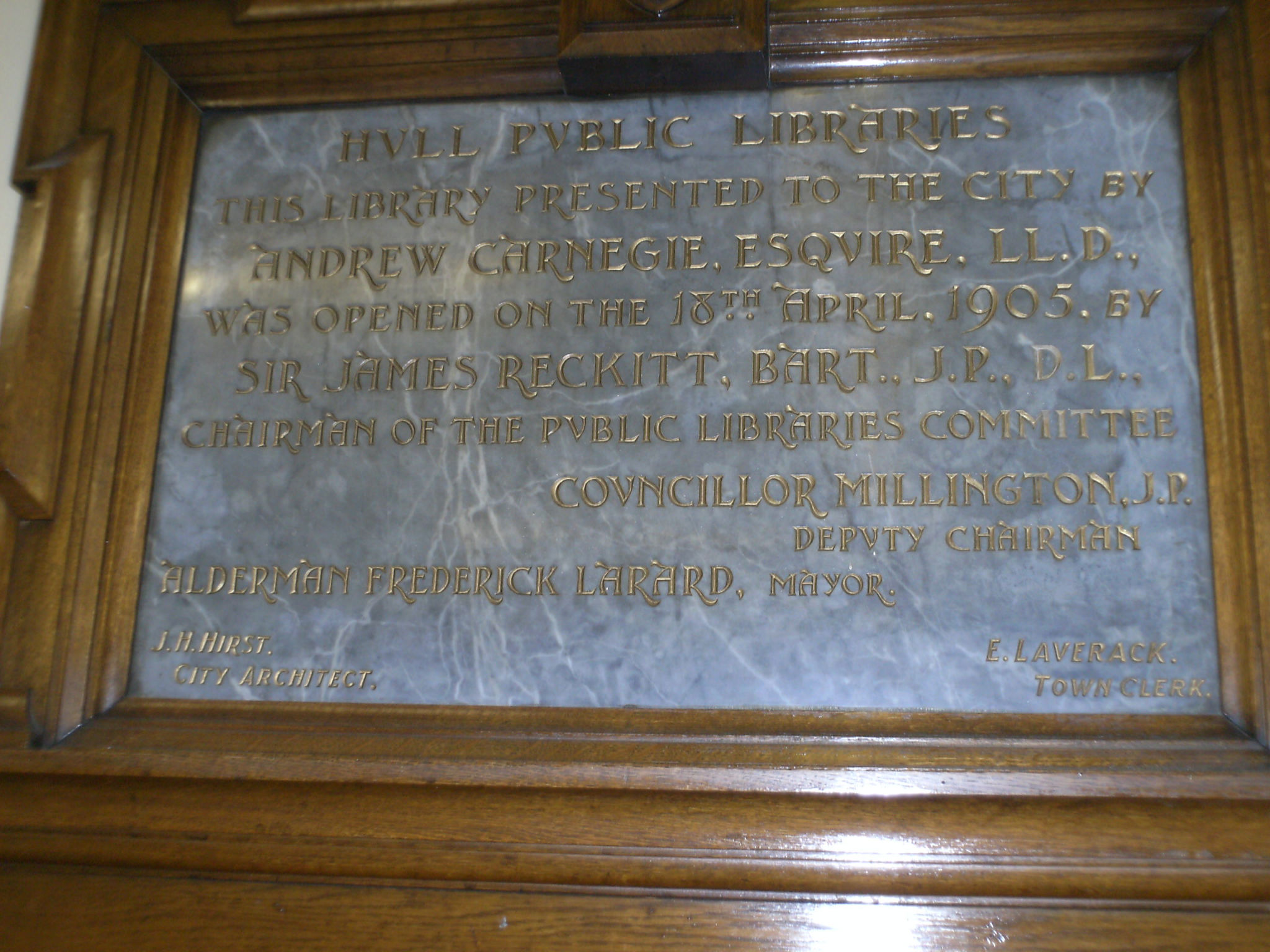 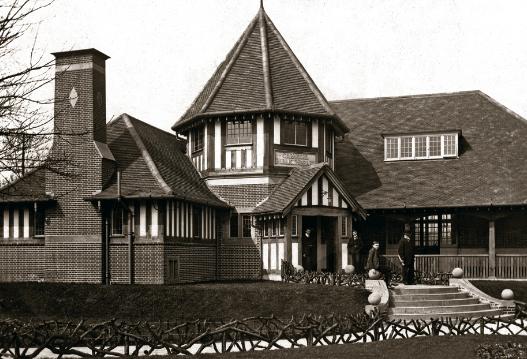 The Carnegie Free Library at the gates of Hull’s West Park was one of 660 libraries in Britain and Ireland built with funds supplied by the Scottish industrialist and philanthropist Andrew Carnegie.

Carnegie supported over 2,500 free libraries around the world and in 1903, following consultation with Sir James Reckitt, donated £3,000 towards the establishment of Hull’s fifth branch library.

The site was supplied free of charge by the corporation and construction began in the winter of 1904, to the designs of the City Architect Joseph Hirst.

The library was opened on Tuesday 18th April 1905 by Sir James Reckitt, chairman of the Libraries Committee, who was presented with a ceremonial gold key from Alderman Jarman. Sadly neither Mr Carnegie nor the Mayor were able to attend due to prior arrangements.

The Parks staff were also congratulated for their work in making the surroundings of the library so attractive.

Following the ceremony the large gathered company took afternoon tea on the balcony, at the invitation of Sir James and Lady Reckitt, and at six o’clock that evening the library was opened to the public.

The library initially held a stock of around 9,000 books, which was increased to 10,000 in 1911, following the re-organisation of the Central Library stock.

The library has suffered only minor alterations over the years, the largest being the addition of a gallery at first floor level in the 1920s, the removal of some floor-standing bookcases, and the loss of its parquet flooring.

In 2001 the council announced the closure of the library, as the new sports stadium to be built nearby would be equipped with a ‘Learning Centre’ to which the library would transfer. The new learning centre has extended opening hours and improved information technology facilities, but its library retains only a fraction of the Carnegie stock.

Despite being awarded Listed Building status in 1994, the historic building was left empty following closure in 2003, and was occupied by ‘Sure Start’ for three years until their purpose built centre was opened in Wheeler Street where they moved to in March 2006.

In April 2006 council minutes described the building as “surplus to requirements” and once more it was left empty.

The Conservation Officer approached the Lonsdale Community Centre in the hope they would consider expanding there but this idea was turned down by the management committee.

The Carnegie Heritage Action Team was formed in June 2006 with the sole aim of rescuing the building from further decline, and to preserve the unique space as a local history and family history resource centre. The former library was placed on the open market in October 2006 and received no interest, the K.C. Stadium having already declined taking it on as a hospitality venue.

Liz Shepherd and local historian Paul Gibson had visited the building during June 2006, and thought long and hard about the consequences of taking on such a huge project. After forming the Carnegie Heritage Action team with local residents and interested parties the decision to proceed was made, and a lease was agreed with the council in November 2007 with the proviso there would be a Service Level Agreement with a council department. There followed months of further discussion and hard work by Liz Shepherd and volunteers and finally an agreement was reached with the Hull History Centre.

A stock of books and maps were donated by Chris Ketchell of the former Hull College Local History Unit, which helped the creation of the centre’s resources. Further material was donated by the college following the untimely closure of the James Reckitt Library. 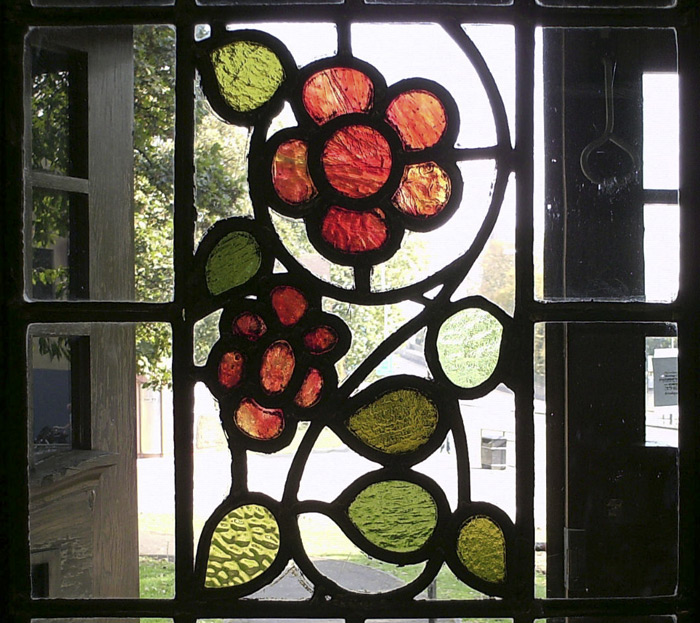 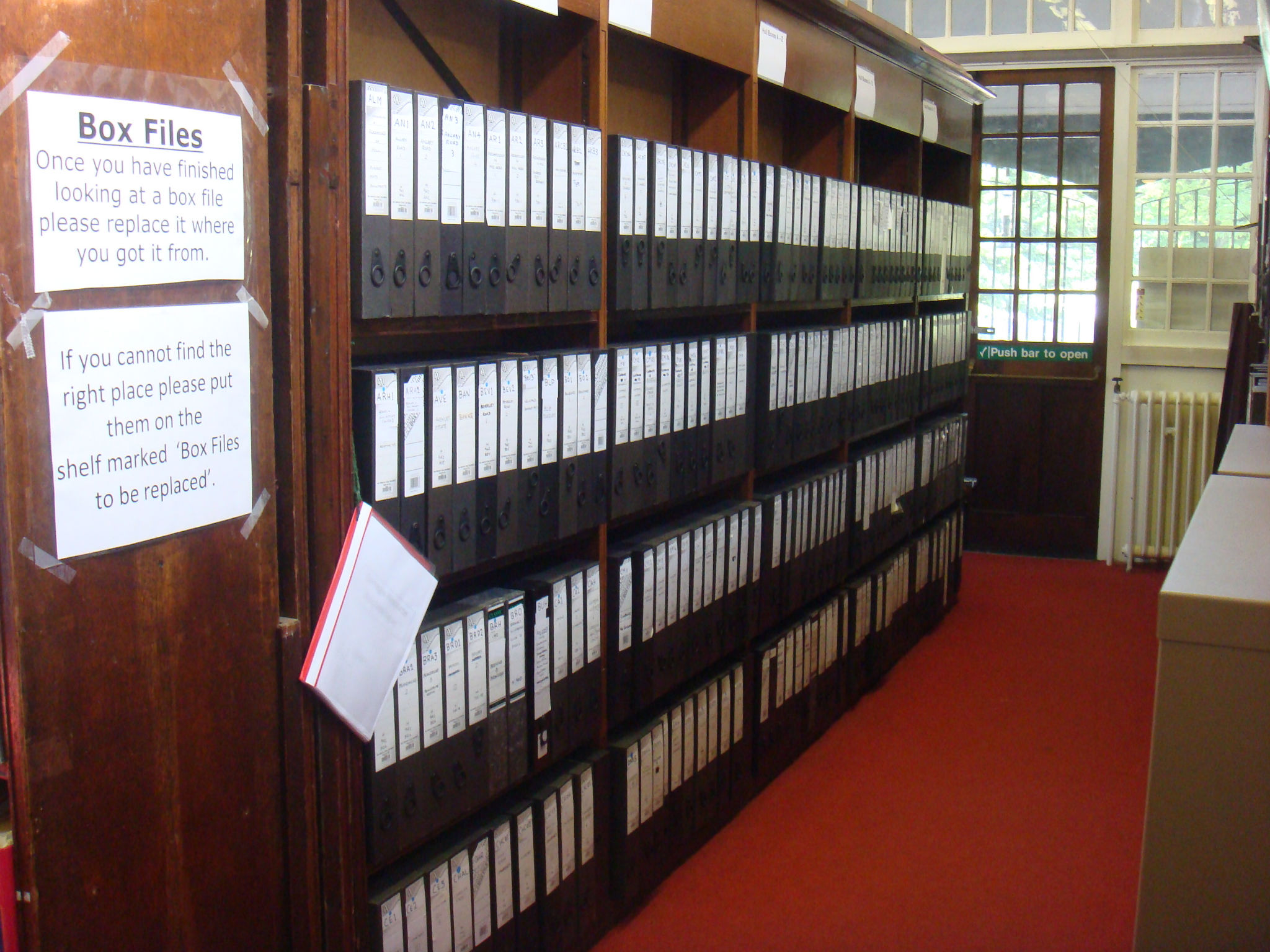 The Present and Future

Following the closure of the council bindery on Chanterlands Avenue, two of the former staff set up a bindery business of their own, and we were pleased to rent them space for their business within our centre. The Bindery is open five days a week from 8.30 am until 11.30 am. The Bindery is not open in the afternoons.

Early in 2008 the centre received a request from the East Yorkshire Family History Society to rent space from the Carnegie Heritage Centre and they now store their resources and stock within the building. They also hold their monthly meetings at the centre on the third Tuesday of most months.